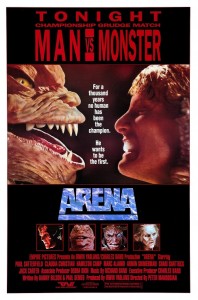 Eventually he starts fighting in the arena, which is a strange combo of boxing, Kumite and aliens that is way more fun than even I could have hoped for. There aren’t many battles during the film, but each one is unadulterated, carnal fun, proving once again that it’s the simple things in life that bring the greatest joys. For instance, the first fight of the film features a cybernetic wolf-demon vs. a lizard encapsulated in a 1950s robot suit. C’mon, you can’t argue with that!

As you can probably imagine, the film follows the standard boxing film model featuring a bit of training, a bit of trash-talking and a bit of poison-induced intrigue that might force the officials to “call off the fight.” Lots of people might suggest that this is a major failing point of the film because it makes it all very predictable and they wouldn’t be wrong, but they would be missing the point. If you’re one of these people, I direct your attention to the previous paragraph, specifically the line that ends with, “a cybernetic wolf-demon vs. a lizard encapsulated in a 1950s robot suit.” All kidding aside, the film does take itself way too seriously during virtually every dialogue scene, which has a tendency to get tedious, but the acting is delightfully over-the-top and the film does a surprising job of maintaining the illusion of being shot on a run-down space station focused around a battle arena.

Featuring a number of actors that would also appear in various Star Trek series, and with a production date of 1989 — the debut year for Star Trek: The Next Generation — the visual aesthetics are very similar to that series. At any moment it feels like Capt. Jean Luc-Picard and an away team will beam in and put a stop to all this animalistic nonsense on this space station hidden away in the far reaches of space. 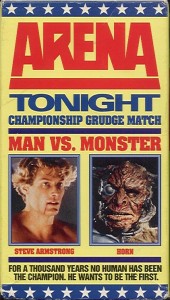 The makeup FX also figure into this Star Trek feel (with an equal dose of Mos Eisley Cantina vibe), featuring a shit-ton of kick ass full-face makeup appliances and almost as many full-body suits for the featured alien fighters. One of these fighters is a twenty-foot long slug / spider / alien combo that has to be seen to be believed. And you guessed it, it gets punched in the face repeatedly! Who needs intergalactic diplomatic relations when you can beat sense into your opponents with a strong right cross?

With all the killer makeup FX, this must have had a fairly high-budget (in Empire terms) but it still has more of a Full Moon feel to it than the more higher-gloss theatrical Empire films. This might just be because the only available version is an ugly pan-and-scan print made for VHS, but I think I can attribute it to the Star Trek TV and/or direct-to-video feel that the production has. I don’t mean this in a bad way at all, it’s just something that stood out to me and will probably detract from the experience for many.

If you enjoy campy sci-fi with lots of foam latex and face-punching, this is your movie! Check it out!

Next week I check out another late period Empire film, Spellcaster! I don’t know a damn thing about it, but I hope it is to magic movies, what Arena was to alien boxing movies.