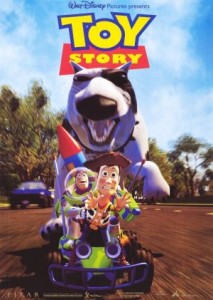 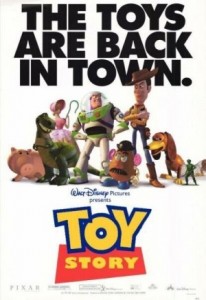 Toy Story introduces us to a young boy named Andy and his collection of toys. It’s the day of Andy’s birthday party and the toys are in a panic as new toys means that an old toy could be displaced from the regular rotation. Enter Buzz Lightyear, one of the most sought after toys of the season. Andy’s toys are an excellent mixture of different, recognizable products and their on-screen representations are visually perfect, as well as flawlessly portraying what you might imagine their animated personalities would be like. Buzz Lightyear and Woody are also great representations of a distinct style of toy, while being new characters themselves. In fact, the movie is a non-stop parade of product placement and on a more bitter day I could get all curmudgeonly about it, but the fact remains that for this film to work completely the product placement is 100 % necessary. If it was all knock-off action figures and toys, you’d never have that connection to reality and your own childhood, taking away a lot of the richness to the overall experience. The film works its magic so quickly and completely because of the viewer’s familiarity to the toys presented here, whether you’re playing with them or remembering them fondly. The idea of a knock-off toy movie is pretty enjoyable to me though and I have to wonder if somewhere out there, someone has created just such a film.

Fifteen years have passed but time has been kind to Toy Story. It is still visually impressive, with only a few moments of obvious technological age. Sid’s dog is easily the lowest point, looking unnatural and ugly just about every time it shows up on-screen. It still works fine, but I’m sure the modelers and the animators at Pixar cringe every time they revisit the film and the dog enters frame. There’s also certain moments where things look a little too slick or the texture looks a little lo-res. None of these minor issues detract from the overall enjoyment of the film though, as the quality of the filmmaking overrides all. If only more live action films were shot and edited this well! 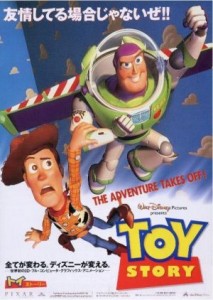 The voice acting from the entire cast is superb too, with Tim Allen standing out as a high point in his spirited performance as Buzz Lightyear. Tom Hanks is a bit annoying as Woody, but it’s not necessarily his fault. I attribute that more to the character and the writing. The supporting cast of toys is key to selling the picture in its opening moments and they do an excellent job. The casting here is truly inspired with such character actors as Jim Varney, John Ratzenburger and Don Rickles playing their characters to perfection, embodying the spirit of the toy and the personality you would expect it to have.

All this being said, I was surprised at how simple the film was upon watching it again. After the initial world-building opening half hour, the true journey begins as Woody and Buzz end up lost in the world at large as Andy rides off to Pizza Planet. This sets in motion a big domino effect that causes the duo to move from one hair-raising situation to the next. Buzz is the only character with any semblance of an arc, going from delusional toy to day-saving hero toy. I guess the moral is that you can still achieve your dreams (“To Infinity and Beyond!”) without being someone super extraordinary awesome. It’s a good message for kids to hear, but it does sort of reinforce the questionable Everybody’s Special routine that seems to have permeated even the darkest recesses of our culture. This safe and tired moral is one of the weaker parts of the film, and it is even clearer after seeing recent Pixar efforts after they had considerably honed their craft. It causes Toy Story to be akin to a piece of cotton candy, heaven in one moment before promptly dissipating as the credits roll and you’re off searching for your next fix.

Toy Story is a roller coaster of adventure and hijinks, a cascading bad-to-worse story that will thrill, delight and be over before you know it… unless you have small children with a penchant for watching movies on repeat, in which case you’ll be ready to pray for death inside of a week. It doesn’t have the lasting emotional effect that some of the later Pixar efforts have, but it’s still a damn fine film.