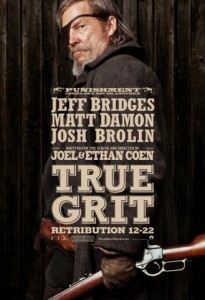 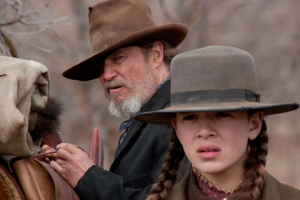 True Grit tells the story of Mattie Ross, a fourteen-year-old girl out for revenge when her father is murdered by a man in his employ, Tom Chaney, while out-of-town on business. To track down the criminal she hires U.S. Marshall Rooster Cogburn, a fat, drunk son-of-a-bitch with true grit. Also along for the ride is LaBoeuf, a Texas Ranger that’s been on the trail of Chaney since he killed a Senator and his dog in Texas.

On the acting front, everybody is up to the task and I found the casting to be especially well done. Jeff Bridges is excellent as Rooster Cogburn, going after the far-gone drunk with a shambling, cocky zeal. Matt Damon plays LaBoeuf perfectly as well, managing to serve his purpose without being in your face. It reminded me in this way of his subtle performance in Invictus. I did entertain the idea while watching that Tim McGraw or Dwight Yoakam could have played the role and re-recorded Glen Campbell’s theme from the original, but only in jest. Newcomer Hailee Steinfeld carries the picture and she does it with an admirable courage, representing the solid, stubborn Mattie Ross better than any known actress could have. Also, Barry Pepper was fucking awesome as the gang leader Lucky Ned Pepper. I wish he was in the movie more. 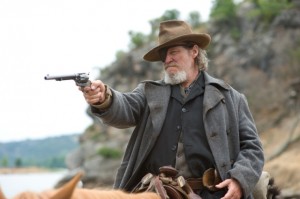 The film is very well-shot, but it’s the Coen Bros. with Roger Deakins at the camera so I’m not surprised. I will say that within the pantheon of their films, it’s not one of their more visually interesting films. It’s mostly a fairly standard looking picture, coupled with a fairly standard story and scored with fairly standard music, culminating in the most straight-ahead, fairly standard mainstream offering from the duo. It is interesting though that the Coen Bros. can work so well within the mainstream ideals and the Western genre. The transition is seamless and really shows their level of filmmaking skill, as very little of their personal style seeps in. This is probably a plus for most audiences, but I am personally disappointed.

So when a film I grew up loving is remade, my initial reaction is the requisite anger flowing into indifference. When said remake is from the Coen Brothers, who sit high on my list of working filmmakers, I realize that despite any misgivings I may have I will be powerless to resist seeing it. I also figured that if these noted gentleman have decided to remake a film, they have a reason or an angle to put on it so that it feels like a Coen version of the story. When they finally decided to work from material that wasn’t theirs in 2007, the resulting No Country For Old Men quickly became one of my favorite films of all time. Obviously, that’s a hard act to follow but throughout the runtime of True Grit I kept searching for that spark, that reason why they made the film. Honestly, I never found it. 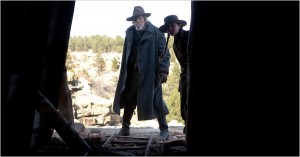 What sets it apart from other remakes though is that this is actually a pretty good movie. It’s just not for me. There’s a lot more subtle, dark humor here than there was in the original, which was very much appreciated, but I’m too closely intertwined in the original’s fabric to look at this version in any way but comparison. Countless times throughout True Grit I found my mind wandering back to how much I enjoyed A Serious Man, last year’s Coen Bros. film. That pretty much sums up my opinion of True Grit. If they had chosen to remake a John Wayne film I was less familiar with, there’s no doubt I would have enjoyed it more, but since they didn’t I am stuck appreciating this great modern western from afar without really being able to lose myself and enjoy it fully.