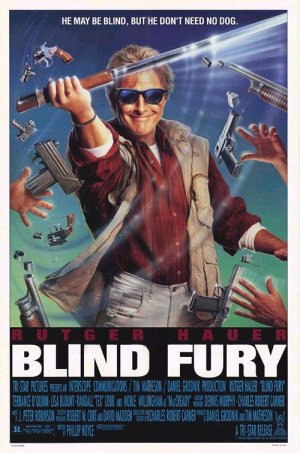 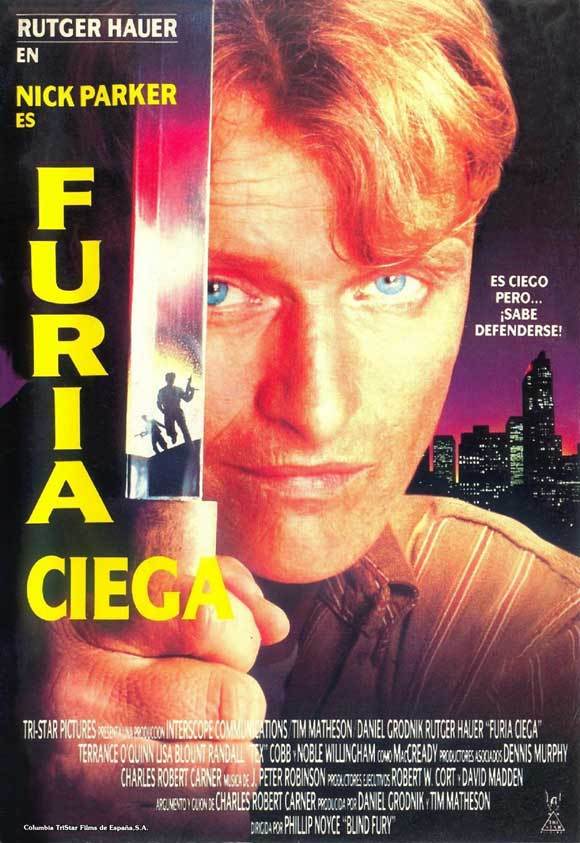 This is the action genre in the 80s we’re talking about here. It wasn’t a time period well-known for taking extreme liberties with the then prevailing formulas. We seemed pretty satisfied with buffed out soldier-type dudes shooting machine guns out in the jungle, or guys fighting ninjas, or kickboxing tournaments. I guess that makes Blind Fury even that much more remarkable. It works amazingly well despite not really being any of these things, while at the same time remaining true to its roots with the requisite tale of drugs, mobsters, and uzis.

Rutger Hauer plays Nick Parker, who in flashback is blinded in the jungles of Vietnam by stray mortar fire. He is dragged away to safety by a benevolent group of Vietnamese and nursed back to health. No longer able to use his eyes as a guide, he is trained to rely on his other senses by learning swordplay from a mysterious old man who hones his skills by tossing gourds and shit at him, much to the amusement of the locals.

Twenty years later, he’s a drifter of sorts, roaming highways on the outskirts of Miami. Able to track down his old ‘Nam buddy Frank, he decides to pay the man a visit. Unfortunately Frank’s wife informs him that he is away in Reno doing some shady work for the mob, using his pharmaceutical pedigrees to manufacture designer drugs against his will. Just then, mob heavies break into the home and shoot Frank’s wife dead while attempting to kidnap his little boy. Nick is able to dish out some crazy blind swordplay, even slicing a gun-wielding thug’s arm off at the wrist, before hurrying the boy away to safety as the two begin the long trek through the Midwest to the child’s father in Reno. 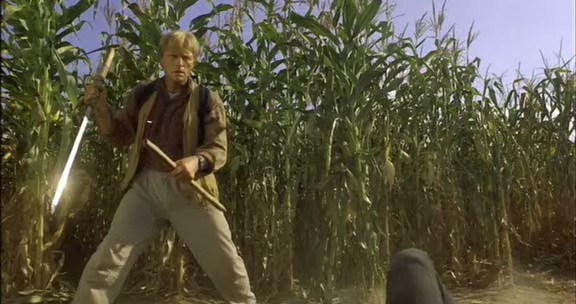 Most of the action setpieces come from random assaults by mob henchmen, the majority are pretty good with the standout for me being a chase through a thick cornfield. The mob heavies have trouble tracking Nick and the boy through the dense field. The blind swordsman, with his elevated sense of perception however has no problem. He slices down thugs with relative ease and even plays on their hindered senses by playing them against each other. At one point he calmly walks in between two patrolling henchmen, calmly saying the word “shoot” before disappearing into the thick stalks. The mobsters instantly turn around and fill each other with lead. It’s a very badass sequence, which is intelligent in both thematic content as well as execution.

It gets kind of silly later on in the second act with the introduction of two dumbass hired hillbilly guns. They represent the kind of bungling, played purely for laughs comic-relief that always makes me cringe. And it’s not really necessary either since the rest of the humor in the film is rather well-played. I could have done without these guys, and with the exception of delivering the brilliant line “Shit… Fuck… Shitfuck!” they only seem to get in the way. 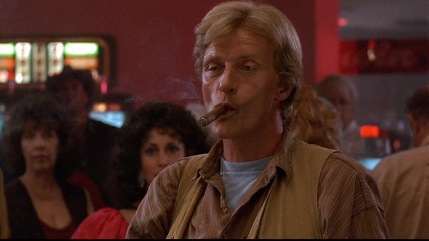 After Nick and Frank are finally reunited, they gear up for the final showdown at some fancy Lake Tahoe ski resort. It’s typical “run down hallways amidst rapid gunfire” stuff until Nick takes out enough guys to make the mobster’s secret weapon show up… Did I say show up? I meant “Sho up!” as the final battle takes place between Rutger Hauer and the master ninja himself, Sho Kosugi! Somebody kicks some electrical appliance into a hot tub and naturally the two fighters hop up onto the edge of the watery death-trap, locking swords and slicing wildly at each other. It’s a fantastic fight even though The Sho is painfully underused here, with not even a line of his trademark growling dialogue being uttered out amidst the battle. I was hoping for a little more in terms of Sho, but it is a fun fight despite the scant three minutes he’s up there on-screen.

Blind Fury is a definite must-watch for fans of both Rutger Hauer and 80s action films. This is without doubt one of his meatier roles and I always prefer to see him playing the hero. It’s a shame that this film isn’t talked about more often as there’s really nothing else like it out there. Definitely Recommended.