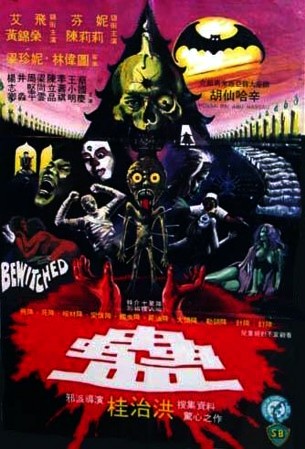 After the big shocker opening, the movie reels itself back at bit and lets us settle into the story and the characters we’re dealing with. The cops quickly get on the case of who killed the kid and easily find that her father (Ai Fei) is the culprit. When taken in for questioning, the father confesses that he did the killing, but that it isn’t his fault because he’s under a spell. The inspector calls bullshit, but the man persists and tells his story. We follow the Hong Kong resident as relates the story of his vacation to Thailand and how he met a pretty girl there. I don’t want to give away too much, but let’s just say that they don’t live happily ever after. 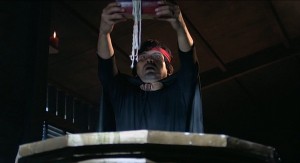 The story of Bewitched is remarkably simple and while that may be a knock to some other movies, Bewitched benefits from it. The first half is devoted to constructing the characters and the world they inhabit. This can be tiring at times and I found myself just the least bit disinterested as the relatively mundane tale moved on. That is, until about the halfway point, when director Kuei Chi-Hung takes a sharp turn towards awesome and never looks back. It’s at this point that we meet the one behind these strange occurrences we’ve been watching, the evil black magic wielder (THE Renowned Malay Sorcerer Hussin Bin Abu Hassan). As his introductory scene begins, a title card displays at the bottom of the screen stating the name of the spell he’s currently working up. I sat up to take notice. You don’t throw up a title card like that just willy-nilly. It’s meant to draw attention, to make you say, “Oh shit, here it comes.” I did what I was told and paid attention, and man did it pay off. 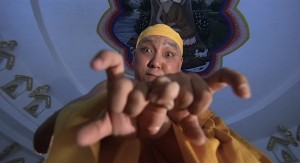 Allow me to spoil just this first spell, the Carcass Oil Spell. In order to cast this particular hex, our evildoer must procure the oil of a recently dead pregnant woman. He does so by sneaking into a temple morgue, and upon finding a pregnant corpse, recites some words and then stabs a long needle into its foot. The corpse sits up and begins oozing out thick, black oil from its shriveled nostrils. He hungrily collects it and we cut back to his lair as he prepares the rest of the potion. This scene is followed by a couple of similar scenes for more spells, but the best fun is yet to come.

Once the police investigator finds out the truth about witchcraft, he seeks out a monk that might be able to remove the spells from afar. The monk asks for the victim’s name and birth date and he goes back to his temple to destroy some evil. What follows is one of the greatest, most cinematic fight scenes I’ve ever witnessed, and the two men aren’t even in the same room! Any filmmaker looking to film a fight between two wizards needs to look no further than Bewitched, as this lengthy scene is nothing short of amazing. The two men continually one-up each other, and just as you think one of them is spent, he turns the tide with a clever charm or an unknown ability. At one point the evil practitioner runs over to a large vat filled with blood, guts and dead fetuses, gorging himself on the liquid to power up for another round. Even at the culmination of this incredible scene, it’s just getting started. The action moves to Hong Kong, where the evil wizard throws spell after spell at our heroes. It is a ridiculous barrage of spells (all prefaced with on-screen title) that has to be seen to be believed. 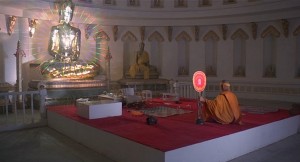 To simply talk about how visceral and awesome this film is from a story or spell standpoint would be cutting it short though. Director Kuei Chi-Hung knocks it clear out of the park on this one, with tons of killer visual techniques and a sure hand that sells every special effect and magic spell with ease. I was cringing, yelling, laughing, and gasping at every turn and Kuei Chi-Hung’s camera played a big part in all of that. The camerawork during the big magic fights reminded me a lot of the Evil Dead films and all of their contained madness. For instance during one spell, the Split-Head Spell, the effective use of snap zooms creates the illusion of head trauma whilst inflicting actual head trauma to the viewers, connecting you directly to the victim’s pain. The use of color was also especially well done, with colored filters and particularly interesting prismatic rings around any light-giving source, giving each shot they’re in an other-worldly look. A good portion of the film was shot on location in Thailand as well, giving the film an added edge in terms of exotic mystique over traditionally shot Shaw Brothers films.

I just can’t say enough good things about this movie. If you have any interest in films dealing in the black arts, track this one down! It is so worth it. Oh and you can guarantee I’m not waiting until next October to bust into some of Kuei Chi-Hung’s other witchcraft films!

Tomorrow, Uncle Jasper closes out Shaw Bros. Horror week with a review of an earlier Kuei Chi-Hung film, The Killer Snakes! Let’s hope it is as good as this one!