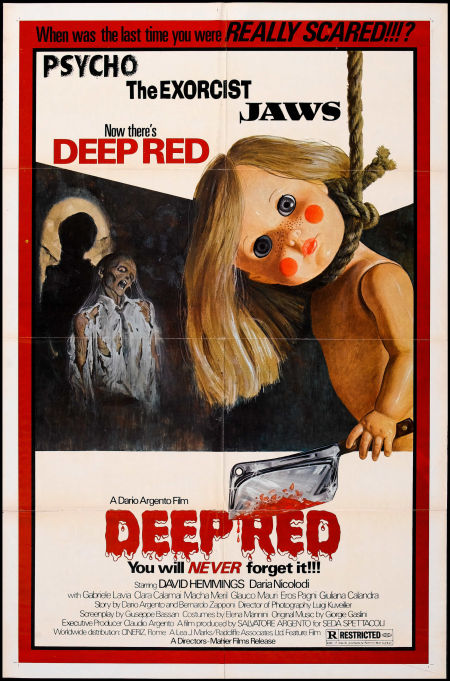 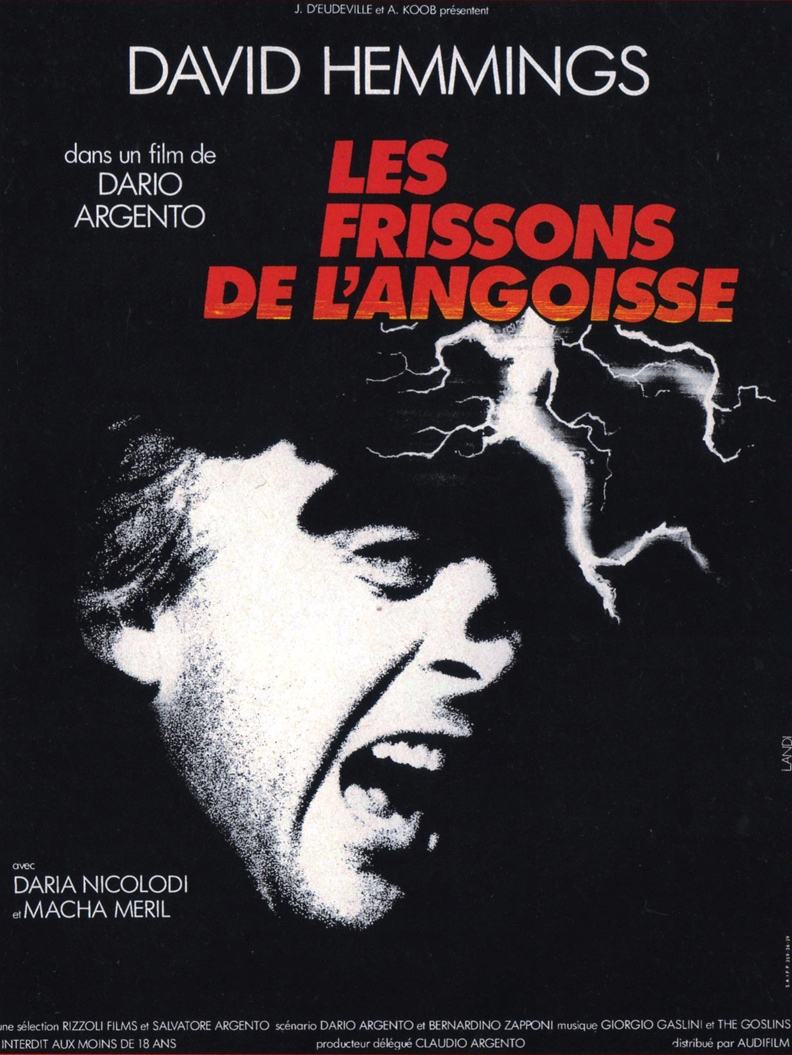 If you saw my review of that one, you’ll know that I feel the criticism railed against it to be misguided as it isn’t all that bad of a film, it’s really more of a mid-range one. I am a bit perplexed by the seemingly universal hate, and watching Deep Red has me scratching my head a bit more. Deep Red is essentially the basic structure and story of The Bird with the Crystal Plumage, but with The Cat o’ Nine Tails‘ slower pacing. Deep Red at least has a more manageable narrative than The Cat o’ Nine Tails, so it is definitely superior to that one, but so far The Bird with the Crystal Plumage still stands tall as my favorite Argento film. It’s a shame because with some tightening this could have been gold. In its time though, I can imagine this created quite the stir because it features some pretty hardcore gore!

In this day and age, the gory moments don’t come close to all the visceral violence we’ve seen over the years, but like all the Argento movies I’ve seen, the death scenes here are definitely not for the squeamish. The murders in Deep Red are disturbing and violent and what really brings them home is the methods used. The murderer runs a scalding hot bath in one scene and holds a woman’s head under it until she drowns. He pulls her head up periodically and we see her face is reddening and burned, with boils forming over her lips. In another scene a woman is quickly cleaved with a butcher knife as she answers her apartment door. These gruesome home-invasion murders are scary and frightening, as they could happen to you at any moment. The blood used may be a few shades redder than it should be, but the believability of these murders is never in question as they are all very well shot and realistic. 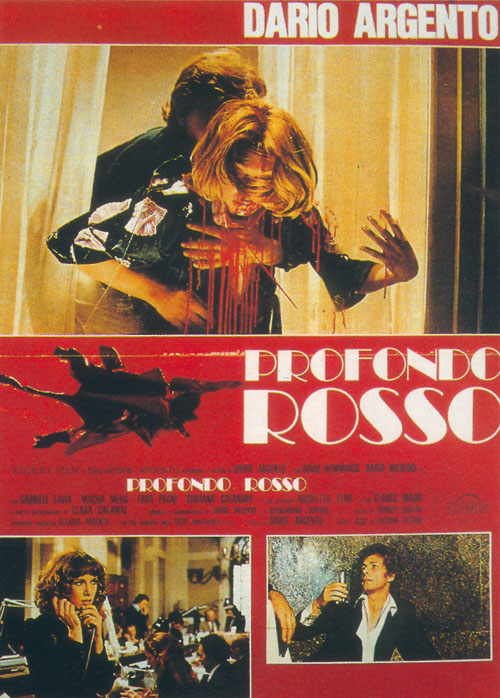 Deep Red also marks the first collaboration between Dario Argento and the illustrious Italian prog-rock outfit, Goblin. I love Goblin, so I was really excited going into this film. The music doesn’t disappoint as it is straight-up gold. Coupled with the film though, I don’t know that it really creates the best effect. Whenever a murder is about to happen, Goblin busts into the main percussive-driven track that explodes with exuberant energy. I want to get up and dance around the room, throwing cares to the wind. Instead, I’m witnessing a grisly murder. Having such distinctly cool music over such horrible events lends the film an air of violence glorification, not something I can really get behind. I love my on-screen violence, but this aspect gives it a pornographic quality that would later be taken to extremes in recent years with films like Hostel and the Saw series. Don’t get me wrong, I absolutely love this score, it just seems tonally out of place while watching the movie. I do have to give Argento and Goblin some credit for not following the horror movie music mold I get so tired of. It’s nice to see someone taking a risk like this, but I just find it incredibly hard to enjoy both the filmed images and the music at the same time, despite liking both individually.

The writing is stronger than The Cat o’ Nine Tails, and the mystery is more interesting, but it still lacks the tension of The Bird with the Crystal Plumage. A pianist sees the murder of a woman in his apartment building. He’s down in the street at the time, so he can’t make too much out. He goes up to the apartment to help and catches a quick glimpse of the murderer leaving the scene. The theme of trying to remember what you saw comes up more directly, but less effectively, in this than in any previous Argento film, making it feel like something of an Argento for the masses. Maybe some big-shot producer with a cigar in his mouth said, “Ditch the art house, kid and we’ll hit the big time with these cut-em-up pics.” Deep Red may be more initially accessible to global audiences, but it suffers if you’ve seen the prior films. As an entry point into Argento’s films though, I’m sure it would work wonders. I’m inclined to give this a re-watch later on when I’ve been removed from the previous films for a while, as I have a feeling I’d like it a lot more without them fresh in my mind. One of the big reasons I was sort of indifferent to a lot of this movie was the fact that I didn’t care too much for any of the characters. I thought the “light” moments between David Hemmings and Daria Nicolodi were especially misplaced and did nothing to build their characters.

Visually, Deep Red recycles a lot of the camera tricks from both prior films (first person killer cam, etc) but still has a lot of interesting things to look at of its own. Gone almost completely are the jump cuts which really sold me on the memory theme in The Bird with the Crystal Plumage, so surprised as I am to say it, I wanted the jump cuts to return. I think Deep Red is a good film, it’s definitely filled with its share of murder, scares, and thrills, but ultimately it is less tense than I wanted it to be. I’d still recommend it though as it has a lot of good things going for it and I’m inclined to think my Argento fatigue is partly to blame for my indifference.

The horror train keeps chuggin’ along tomorrow as Uncle Jasper chimes in with another Lucha review, this time with Las Vampiras!