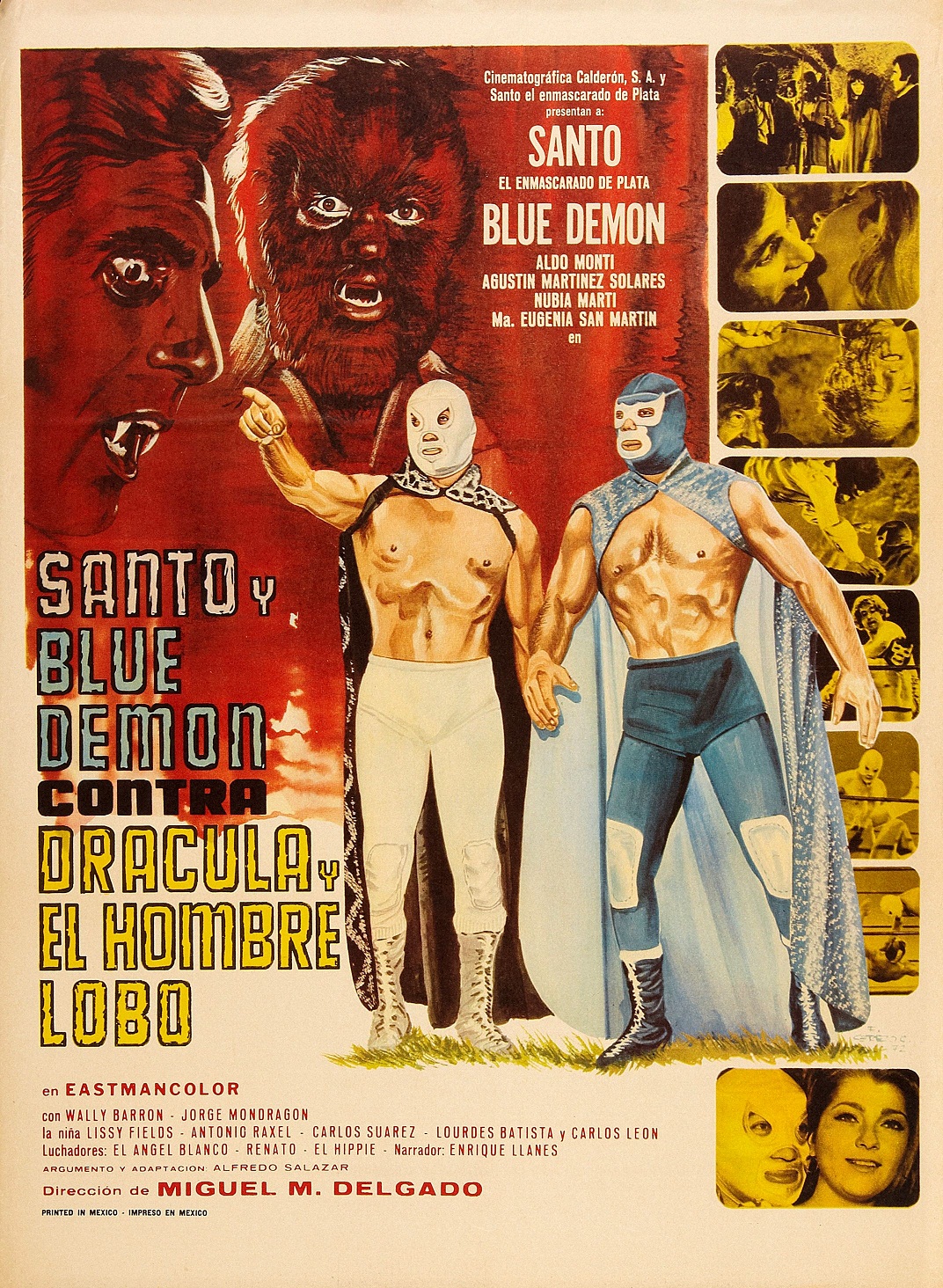 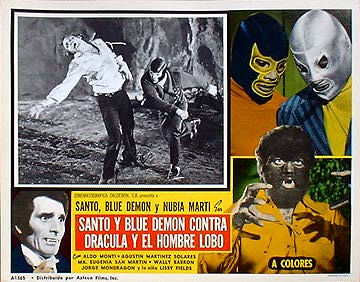 The film opens in familiar territory with Santo duking it out in the ring with “The White Angel”, a luchador whose white mask looks very similar to Santo’s silver one. If it wasn’t for Santo’s stout, gnome-like body proportions I think I’d have a hard time separating the two. After the match Santo’s girl informs him that her uncle would like a word with him. Santo meets with the man, Luis Cristaldi, who is… you guessed it, a professor. The man is obviously not very high on Mexico’s professor hierarchy however since he is sending his niece out to round up Santo instead of using some retro, ultra-futuristic, rotary dial TV communicator device… what a n00b! The professor lives in fear that some evil force is threatening the life of his daughter and granddaughter, he can’t quite put his finger on it, but he thinks it may have to do with the fact that he is the distant relative of a wizard that killed Dracula 400 years prior… Yeah, that’s usually how those things tend to work. 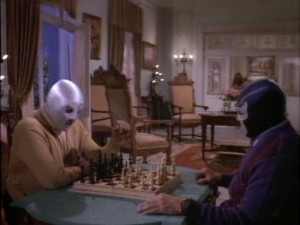 Meanwhile, some fat dude named Eric is doing satanic spells and shit in some crypt somewhere. Statues start spitting fire, so he knows he’s doing something right. He then begs the devil to resurrect Dracula and The Wolf Man, not for power, not out of morbid curiosity, not even out of an affinity for the dark arts. No, in some potently twisted strand of logic, he wants Dracula to come back to life and thank him with gold. Surely there are easier ways to make a living out there. If you are so poor that “resurrect Dracula and ask him for money” is at the top of your to do list, then pal, you have bigger problems that money just ain’t gonna solve. Kidnapping the professor, he brings him to the crypt, and in a particularly gruesome scene for a Santo film, he slits the old man’s throat as the blood drips onto Dracula’s skeleton, instantly bringing both him and the Wolf Man back to life.

Dracula is a pretty impressive dude this time around, much classier (and also more Mexican) than the jolly Tom Smothers lookalike featured in vs. the Monsters. The Wolf Man looks more or less the same… that is, when he’s the Wolf Man. You see, the film decides to have the Wolf Man gallivant around town as a normal guy for most of the film, trying to rope the professor’s daughter in by wooing her. It takes Blue Demon punching him in the face repeatedly towards the end, literally beating the wolf back into him, in order to restore his hairy appearance. I felt a little shortchanged here, as the Wolf Man has long been a staple of Santo films and he finally gets his name in the title, only to run around clean-shaven for the majority of the film. 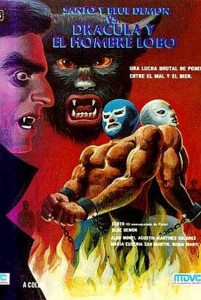 Santo begins his investigation, enlisting the help of his friend Blue Demon, who also makes his first appearance in the film while fighting in the ring. He takes on the fantastically named “Renato the Hippie”.  It’s at this point I finally saw a major distinction between the styles of Santo and Blue Demon. While Santo prefers the no bullshit, straight-on powerful approach, Blue Demon dishes out a more flashy, acrobatic style. Although he commonly plays second-fiddle to Santo, Blue Demon’s flying scissor locks and leaping jumpkicks actually establish him as a more impressive fighter this time around. It seems that the filmmakers were also aware of this, giving Blue Demon much more to do here than in previous efforts.

With wrestling out of the way, the two try to track down the location of the crypt, bumping into a gang of flamboyant mobsters along the way. When they finally stumble upon the catacombs they discover that a whole army of vampires and Wolf Men are waiting for them! There is something about a pack of Wolf Men as opposed to one Wolf Man that just looks silly. They look like a bunch of overgrown Ewoks wearing leather jackets and pastel knit-sweaters. Regardless, Blue Demon gets outnumbered by them and is soon captured and chained to a wall. Helpless, he is forced to watch as a disloyal Wolf Man is forced to walk a plank laid across giant pit littered with razor-sharp spikes. All is going well until the main Wolf Man starts wobbling the plank, making the traitor fall to his death… FATALITY!

Blue Demon is forced to walk the plank next, and when the Wolf Man begins his wobbly plank schtick, Santo leaps in just in time. Chucking spears into Wolf Men and Vampires left and right, the two have some serious rhythm together before, in trademark fashion, the action comes grinding to a halt in a satisfying, but anticlimactic resolution. 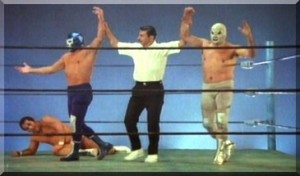 With business taken care of, I was a little surprised to see the film continue with a pretty entertaining tag team wrestling match tacked on. It’s Santo and Blue Demon vs… you guessed it, The White Angel and Renato the Hippie. As good as the fight is though, I think it’s the super-enthusiastic announcer that ultimately steals the show. He rattles off all kinds of great lines like “…he lifted him up lightly as if he were a piece of paper!” “Get out of here, Hippie!” and my favorite, “They have turned him into a blob!”

Whew! Damn, there’s a lot of movie here. While not quite the wacky roller coaster ride that vs. the Monsters was, Santo and Blue Demon vs. Dracula and the Wolf Man (that fucking title!) provides more than enough fun and goofiness to place this right up there in the upper echelon of the Santo filmography.

2 thoughts on “Uncle Jasper reviews: Santo and Blue Demon vs. Dracula and the Wolf Man (1973)”