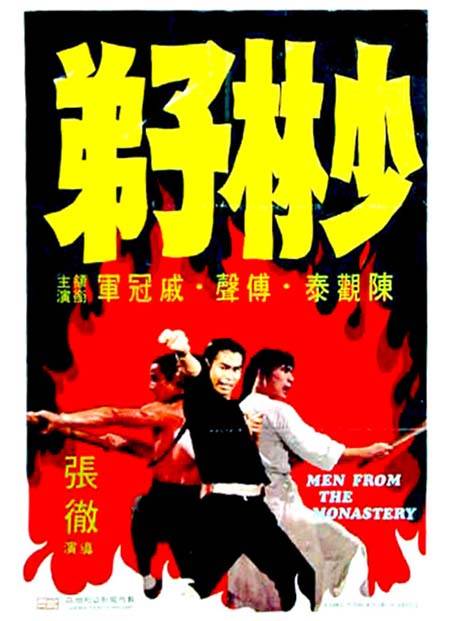 The film opens up in classic Shaw Bros fashion, with a fun and unique action setpiece featuring Fong Sai-Yuk battling through the famous “Hall of Wooden Men” in the Shaolin Temple, his final test before returning to the outside world. He makes his way down the hall as he is attacked by small groups of men each wielding their own unique specialty weapon. What this means for the viewer is that you get Fu Sheng taking down guys with sticks, knives, staffs, daggers, and shields in a plethora of solid Lau Kar-Leung choreographed fights within the first five minutes of screen time. You can’t beat that! Afterwards, we get a classic example of Shaw Bros logic as some shady Shaolin traitors whisper behind a corner about Fong Sai-Yuk’s mother bathing him in vats of wine as a child in order to make his skin impossible to pierce. They go on to explain that the only way he can be killed is by an upward stab through the balls and up the spine while he is jumping through the air… I love you Shaw Studios!

After his return home, Fong Sai-Yuk tracks down a local Manchu asshole who has been terrorizing the locals and fights him in one of those classic “kung fu on long tree stumps with bamboo spikes below” scenes. The fight itself is staged extremely well, as the two couple intricate footwork with some nail-biting, wire-assisted near misses.

Segment two ups the drama both in terms of action and intrigue. After Hu Huei-Chien’s father is murdered in a gambling hall dispute with members of the Manchu-backed Jin Lun gang, the poor guy attempts to extract his revenge from them over and over again, getting the living shit kicked out of him each time. It isn’t until he stumbles across a wandering Fong Sai-Yuk that he gets some decent advice. Sai-Yuk gives him an eager pep-talk which can be summed up as follows: Just go to Shaolin Temple and train, then you can get your revenge! Hell, It worked for me! After a short sequence of Huei-Chien training on the temple grounds, we are instantly fast-forwarded to three years later where he is now a well-oiled revenge machine. 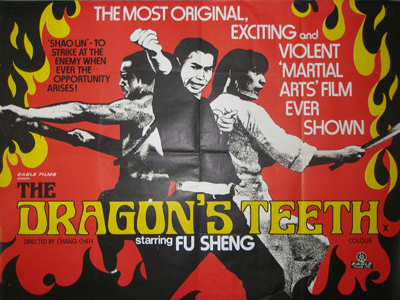 As Sai-Yuk creates a diversion for some Jin Lun heavies at the gambling hall, Huei-Chien infiltrates the gang’s factory, mowing through dozens of henchmen with his newly refined Shaolin kung fu. It’s a classic example of Divide and Conquer and is ridiculous fun as it plays out on the screen. I’m always a fan of stacked odds vs. clever tactics and watching these two guys ingeniously rip a new one into the bullying hooligans is definitely one of the finest moments in the film.

When the two are finished with the gang, they finally decide that it’s time for a more pointed attack at the Manchu power structure. They suggest seeking out Hung Si-Kwan for their triple pronged assault. Segment three begins with a gradual build-up to a bad ass entrance by Chen Kuan-Tai, who has been hiding out from the Manchu army following the events of Heroes Two, organizing a guerrilla band of rebels to fight the oppressors. In the years since the previous film Si-Kwan has turned from simple freedom fighter to a completely unhinged Manchu killing machine. In a brutal display of his power he silently stalks a couple of patrolling officers before whispering the immortal line “My name is Hung Si-Kwan, and I kill Qings!” into their ears and killing them. He proceeds to drop the dead bodies over a wall, right on the front door of Manchu headquarters.

At this point, the Manchus are so irate at these three troublemakers that they decide to burn down the Shaolin temple out of spite. It’s at this point that the fourth and final act begins. Chang Cheh ramps up the seriousness of the imminent battle by deciding to run the opening credits all over again! It’s easy to dismiss this as another uniquely silly Shaw Bros moment, but it actually works extremely well as a tension builder, almost as if he is telling the audience “Now the real shit begins!”

As the three heroes and a handful of rebels hide in a derelict temple, the Manchus get wind of their whereabouts and plan an all out assault. The final battle plays out like a kung fu tinged battle of the Alamo with archers, swords, and an army of end-of-their-rope Manchus swarming the place. The battle provides plenty of shocking moments and manages to justify the massive build-up provided by the preceding three acts. As in Heroes Two, Cheh laces the carnage with heavy doses of blood and some wacky camera tricks. The red tints of the previous film make their return here, as does an extended battle in black and white. This particular moment is probably the best in the film, as Huei-Chien makes his final stand, taking out dozens of Manchu in an absolute rampage of a showdown that only makes me wish that the Shaw Bros Studios decided to shoot more of their films in gorgeous black and white.

While Heroes Two is definitely the more solid film, Men from the Monastery manages to outdo it in terms of sheer scale and with its innovative use of narrative technique. Everything here is bigger, badder, and more epic than in the preceding film. Chang Cheh proves why he was one of the big guns of martial arts cinema and provides thrills and intrigue at a mile a minute. This is definitely one of my new favorites in the Shaw Bros catalog.

3 thoughts on “Uncle Jasper reviews: Men from the Monastery (1974)”