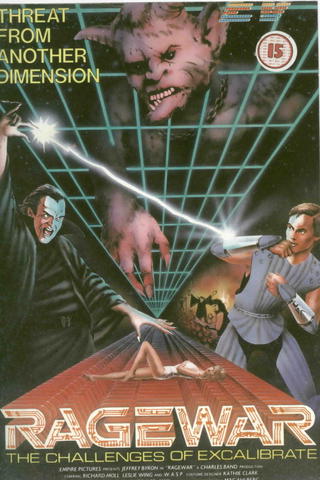 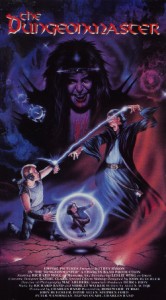 When the film resumes we find our hero, Paul, looking a little different than his adventurer dream-self. He’s dressed in a suit and tie with some of those big, thick-rimmed eyeglasses that were practically the only spectacles available in the 1980s. Paul was involved in some sort of unexplained experiment that allows him to communicate directly with his advanced AI computer X-CALBR8, affectionately termed CAL. This attracts the attention of the evil wizard/Satan/Dungeonmaster character named Mestema who captures Paul’s girlfriend and forces him to battle in a crazy series of challenges. Paul, having no eyeglasses in this dream-realm, is given a power glove interface so that he can utilize CAL’s powers in the games.

How fucking cool of a setup is that? My head was exploding with the unlimited possibilities of this and surprisingly, the film does not disappoint. It avoids the trap that I feel most anthology films fall into, that the segments are too long. Each challenge in Ragewar lasts only a few short minutes, so instead of feeling anthology fatigue, you are actually sad that they are moving on. It’s the right choice though, because this only leaves the door open for repeat viewings to satisfy your Ragewar cravings.

The film features another excellent Richard Band score, this time with some help from Shirley Walker. The score is a mix of orchestra and synthesizer, but mostly synth work. The music captures the mood of each set-piece while still sounding like a cohesive score, so you never feel like the film is disjointed in any way. Like The Dude’s rug, Band’s music really ties the movie together and I am consistently impressed with his work.

The list of directors on this one should be enough for any Full Moon fan to get excited. It’s basically all their top talent working on one movie. They each direct one of the challenges and every one takes on a slightly different feel, with none feeling superfluous or repetitive. Fans of all kinds of genres will find something to like in Ragewar as so much is represented. Stop-motion, standard makeup FX and puppets, heavy metal band W.A.S.P., Road Warrior-like car chases, Slasher movies, ’80s dance classes, it’s really got it all! The effects are all well done and super fun for 1980s film fans. Specifically, if you enjoy the 1980s hallmark of lightning/laser FX, you will not be disappointed with this one. It only runs 77 minutes too, so it’s densely compacted into its most potent form. This is a really fun movie that has been relegated to bargain bins and dusty VHS shelves for too long, so put on your power glove and check it out if the opportunity presents itself.

The Empire/Full Moon Series returns to its rightful place on Tuesdays next week, when I travel across space and time to bring you my review of Trancers!