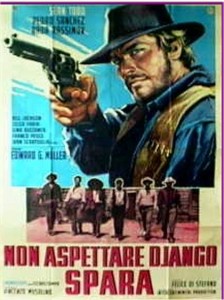 Click the play button to listen to the Don’t Wait, Django…Shoot! theme while you read! 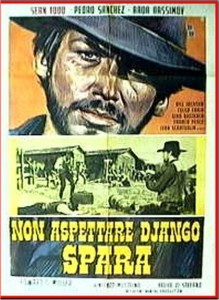 Django, played here by Ivan Rassimov, returns to his father’s home. His sister (played by Rada Rassimov, his real life sister) expresses a desire to leave, but Django convinces her otherwise. He grabs his gun and proceeds to town, to do what he does best, take revenge. And surprisingly, he does just that, only twenty minutes into the film.

Navarro has arrived in town looking for his son. He finds him murdered in the street, so he challenges the men of the town to tell him who killed him or else he will kill them. It’s a great scene scored by sparse drums and light guitar, adding to the tension. Navarro makes good on his threat and kills some of the men when no one speaks up, but in the midst of this confusion Django walks into town and starts blasting. It ends up with just Django and Navarro locked in a duel. Django proves quicker and Navarro is no more. At this point, I was knocked off-balance. With the man who killed Django’s father dead this early on, what would the rest of the film hold? In a somewhat unexplained logic jump, Django continues to pursue the remaining bandits in an effort to retrieve his father’s money. I would have preferred the revenge to happen later in the film, but that’s the way the Django crumbles.

There is a thick, brooding atmosphere in this film that reminded me a bit of the Leone westerns. It’s not at that level, but the combination of a well-placed camera and iconic music elevate this otherwise standard Django picture. The film only lacks a couple of key ingredients to become a great movie. The first glaring oversight is the story. It’s nothing special. It starts out well-told but as the film goes on it unravels like a ball of yarn rolling down a hill. The other major flaw is the fact that our central character Django is just flat-out boring here.

This Django doesn’t sneak softly or practice ninjitsu, nor does he wear black-and-white furry cowhide like the Son of Django. He dresses like any average Western hero from any random movie. Django is once again a man of few words, and you can sense that quiet storm brewing behind his eyes, but Ivan Rassimov just doesn’t have the eyes or the emotion to pull off this type of character effectively. He does his job well enough and didn’t offend, but he also didn’t make any lasting impression. Django also has a sidekick in this one, a Mexican dude in a white suit with red bow-tie. He’s the Sallah to Django’s Indy and is always there to help out in what would otherwise be fatal situations. One of these interventions proved quite funny, as he rode right into the middle of a tense gunfight on a wagon from out of nowhere. He then drove the wagon around in circles around the battlefield. Some might call this ridiculous, but it’s probably one of the most memorable scenes in the film. Unfortunately, the sidekick’s boisterous nature makes Django’s boring character even more apparent, so it’s hard to get invested completely in the film.

Despite these pretty big flaws, the film is still fun to watch thanks to the excellent soundtrack and the truly inspired directing from Edoardo Mulargia. After a quick IMDB glance, I see that he directed a number of other westerns, including a couple more Django clones (W Django! and Shango), both starring Anthony Steffan from last week’s Django the Bastard. After watching this film, I’m excited to see some of Mulargia’s other films, as he really seems to be sure of himself and competent behind the camera. Hopefully the stories are better.

And for all those wondering… according to this film, Django’s full name is Django Foster.

Don’t miss tomorrow’s review by Uncle Jasper of the double clone film, 1970’s Django and Sartana are Coming…It’s the End, as the second week of A Fistful of Djangos continues.