Click the play button to listen to the song from the film that introduces the Son of Django, They Call Him Django, while you read! 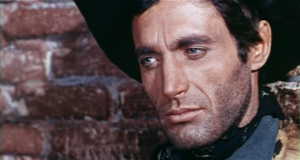 I’m not gonna shit down Gabriele Tinti’s throat too much here as I truly believe he was not given much to work with. He is no Franco Nero, that’s for sure… and I’m not even certain he’s an Anthony Steffen. His sour turn as Django’s son is simply the product of a bunch of uninspired, creatively-deficient filmmakers who really couldn’t care less about what they were doing.

This film is so piss poor and meandering in its execution that I literally had no clue who anybody was or what the hell they were doing for the first 30 minutes or so. We have a guy wandering around the hills alone. He gets his horse stolen, walks into town, gets mistaken for somebody else, shoots some guys, lands in jail, gets broken out of jail, and meets up with the guy who stole his horse. All of this just to introduce the horse thief, who ends up being a relatively minor player. It is only through a song about 30 minutes in that we realize that the main character is the son of Django, seeking revenge for the death of his father. What kind of lame cop-out is that? What respectable director really prefers to dole out major plot points through a song than through on-screen action? That shit might work on Broadway, but here in the realm of Spaghetti Westerns it does not. 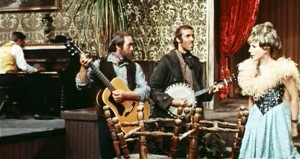 Speaking of music, this film also features what has to be the most painful barroom song and dance number I have ever seen. Some kitschy saloon singer breaks out into in an ear-piercing, played-up country twang as her two overly enthusiastic guitar players strum madly with excitement. It’s simply excruciating to watch as these three ham it up in what almost looks like an experiment with glue sniffing gone south.

Django’s son and his quest for revenge is the only true motivation this film has going for it, but instead it decides to get mired up in some horseshit feud between rival ranchers and their hired thugs. We are treated to long, drawn out scenes of these two guys ordering their men out to fight one other, while each goes on and on about how much of a bastard the other is.

Somehow Django’s son gets involved, and through flashback realizes that one of the men may be the one who killed his father. This is further elaborated on by a mysterious priest who claims to be an ex-gunfighter who knew Django, and was there on the night of his death. Sensing that trouble is brewing, the priest decides to strap on his holster one last time. The priest is hands down the only interesting character in the entire film. There is something about religion and violence co-existing alongside each other that has always had a certain warped appeal to me. I really would have at this point preferred for the narrative to just forego the train wreck it had been carrying along for the previous hour and instead focus on the priest and his turmoil in reconciling his past life with his new one. But God forbid this film actually giving the audience something it wants. Instead we are treated to more mad-rancher screamin’ action and an anti-climactic saloon gunfight that begs for your interest with some admittedly cool stunt work. 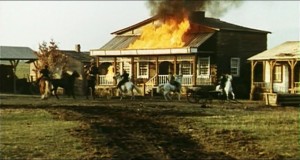 Whatever. If you make it to the end of this film with even the slightest bit of interest, than you are a better man than me. I simply could not find the willpower. Just staying awake through the end was literally draining enough. This film plays out like a broken math problem, a repeating decimal that forges onward without rhyme or reason.

I did not enjoy myself here, it was incredibly boring and I’m only getting more bored writing about it. My review of Son of Django? Here it is:

That wraps up Week One of A Fistful of Djangos! Come back next Monday for Will’s review of the 1967 film, Don’t Wait Django…Shoot!