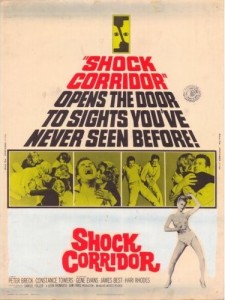 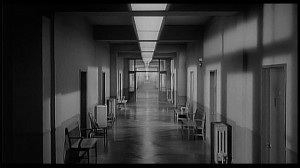 The film tells the story of a journalist, Johnny Barrett (Peter Breck), who hopes to uncover the truth in an unsolved mental hospital murder and win a Pulitzer Prize with the resulting story. He trains himself to fool the doctors of the institution so that he can be admitted as a patient and observe from the inside. There were three witnesses to the crime and Johnny talks with each one over the course of the film. Each witness is a wonderful character, all played by great, unsung actors. Stuart, a man convinced he is a Confederate General, is played by James Best who was in tons of stuff, but I know him best from his work in a couple of Andy Griffith episodes. Hari Rhodes plays an African-American man who believes himself to be Grand Wizard of the KKK and displays a wonderful range and power in his performance. Finally, we have the excellent Gene Evans, star of many Fuller pictures, playing a genius who has reverted back to the mind of a child. These witnesses stand out as the highlights of the film. The setup of each questioning scene is a little too formulaic after you’ve seen one of them, but the scenes are all so good unto themselves that this can be forgiven. 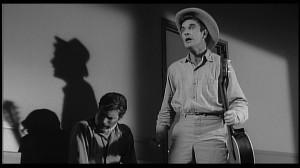 On a surface level, this isn’t the greatest film. I prefer the other Sam Fuller films I’ve seen to this, but I still recognize how well done this is overall. Specifically, Fuller’s use of sound in the film is excellent. One scene involves a character singing opera in the middle of the night. At first we hear only his voice, the sound we would hear if we were in the room with him. The camera focuses on Johnny, we are hearing what he is hearing. As the camera moves up to show the patient singing, the sound of a full opera with orchestra fills the soundtrack. The patient bobs his head with the thunderous music. When we cut back to Johnny, the opera jarringly drops out of the soundtrack and we are left with the ambient audio of the room again. Fuller skillfully illustrates what is going on not only in the actual room, but also what the characters are hearing within their own minds. He uses this technique again later on, with equally pleasing results.

Without question there are some amazing moments and scenes contained here, but there’s also some stuff that is a bit boring and slow as well. Specifically, there’s a burlesque scene early on that seems completely unnecessary, but maybe I just missed the point. Shock Corridor is very well shot, but its B-movie roots will throw off a lot of viewers who are watching this simply because they heard it was great. One could argue though, that to only look at the surface of Shock Corridor would be missing the entire point of the film. 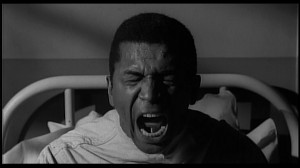 Fuller is known for his distinct political views and his uncanny skill for working social commentary and subtext into his scripts. The main character and each of the witnesses represent something greater than a man in a mental ward. Our main character, Johnny, is an enterprising young man looking only to increase his place in life by winning the Pulitzer Prize. He cares nothing for solving the murder, except for the success it can give him. This reckless pursuit of success ultimately means his downfall.

The three witnesses each represent a social problem afflicting the then current America. The sad thing about this is that 47 years later, the same problems are still evident in our society. The Euripides quote rings true throughout and Fuller’s underlying assertion that these insane problems afflicting America are harbingers of its destruction, is still a plausible and relevant thought. Like Dr. Strangelove, it is a testament to the power and truth contained in the film, but is ultimately very disappointing because as a society we haven’t moved any farther up the cultural ladder. Shock Corridor is not a film for everyone but it is a film that offers a lot to patient viewers. For me the film is greater after it is over, when I am left with only my fading memories and my thoughts on the haunting visions that Fuller has conjured up.