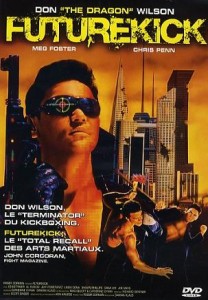 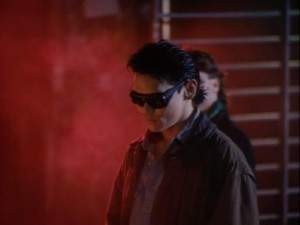 Future Kick is the kind of movie I would have snuck out of bed and stayed up late to watch on Showtime back in 1991. I would probably hang out with all the cool kids at the swing set the next day bragging about all the awesome reverse tornado kicks “The Dragon” did, all the cool boobs and strippers I got to see, and the guy whose head exploded all over the place, painting the wall with brain bits and bone splinters. When you are 12 years old you couldn’t beat that shit. Now I’m older and I have acquired a refined taste for subtler fare like Mexican Wrestling and Chinese Superhero films.

As a martial arts film, this movie fails miserably on every level. After years of exposure to Hong Kong kung fu cinema nothing could prepare me for a trip back to the dark ages of martial arts movies, and the clunky slow-paced choreography of ’80s/early ’90s Hollywood fare was even worse than I initially remembered. I don’t know Don “The Dragon’s” merits in the martial arts world off-screen, but in front of the camera every kick and punch is so slow and telegraphed that it should be listed on the departures board at LAX. 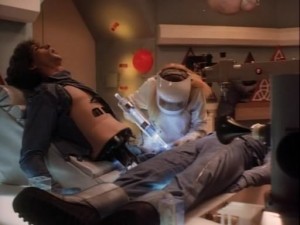 As a science fiction film however, this movie unintentionally soars! This film is so uncouth and overt in its attempt to force its heavy-handed dystopian/cyberpunk shtick so far up your ass, that you’ll be shitting giant TV screens and replicants for weeks. Best of all, this vision of the future is delivered in a one-of-a-kind, ultra low-budget style. See that pair of two dollar sunglasses? “…what sunglasses? This is my Cyberon visor!” OK, but why is that Intellivision controller glued to that big metal chair? “…what are you talking about man? That’s the death sport of the future, LaserBlade!” It’s this kitschy, budget imposed sci-fi world that gives the film all its charm. Believe me, I was ready to trash this movie like there was no tomorrow, but the gaudy cyber-cheese prevailed and eventually won me over.

And all the hokey sci-fi drivel doesn’t stop there. This is one of those movies with the “we must get the disc that contains all of the valuable information on it” MacGuffins … it’s good to know that in the year 2025 the 3.5 inch floppy makes a stellar comeback. Also inadvertently hilarious is the virtual reality system which amounts to a broken pair of wraparound headphones and a blank CDR with the words “Virtual Reality System” stamped onto it. Really, the movie is so ripe and chalk full of this stuff that I can go on for days.

The opening, Linda Hamilton-esque narration introduces us to a future where evil corporations and their android warriors, the Cyberons, terrorize the streets. The wealthy were rich enough to flee for the moon colonies, leaving Earth a rotting cesspool of violence and fear. Don “The Dragon” is one of the last “good” Cyberon warriors, and he is up against two “bad” Cyberons, played by Eb Lottimer and the late Chris Penn. I have no fucking clue who Eb Lottimer was, or if he even made any films after Future Kick. But he does use a knife with three blades on it to rip a bloody heart out of some posh executive’s chest, so all is forgiven. Chris Penn is the odd one out though. If I was the casting director for a badass sci-fi opus with karate android fights, then Chris Penn would be one of the last motherfuckers I’d consider. The editing does give him a pass though, despite the complete lack of fighting ability, and he does die in one of those ultra-cool (and ultra-’80s) “bad guy kicked into live electricity” slow-motion death scenes. 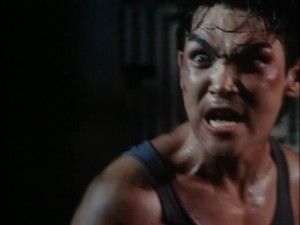 Between the shitty dialogue and Don’s wooden delivery, it actually works to his benefit that he is cast as a robot here. This may be one of the few rare instances where utter lack of acting ability actually lends itself to a performance. Meg Foster is in here too, trying to add some credibility to the rest of the cast, but even then she’s just crying and reluctantly shooting guns for most of the film. This movie also stars a lot of strippers, like a whole fucking lot of them, like a stripper is in every other scene.

Oh and gore!! Man, now this is where I was pleasantly surprised. Anybody can chop off a head and call it a day, but creative gore takes a certain je ne sais quoi that is hard to come by, especially in today’s CGI-obsessed Hollywood. Let me just say that there is a scene where “The Dragon” decapitates a guy with a fire escape ladder… a fucking fire escape ladder! It completely caught me off-guard and had me reaching for the skip-back button almost instantly. The quality gore does not stop there either, we have the aforementioned bloody hearts, exploding heads, and overloaded squibs littered throughout the rest of the film.

Future Kick is sublime entertainment hidden away under the guise of a generation-old, generic martial arts film. Never judge a book by its cover. That is the lesson for the day.