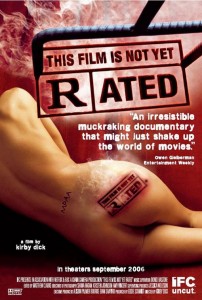 This Film is Not Yet Rated looks to pull the tablecloth out from under the MPAA and expose their asinine film rating system. I am the choir this film is preaching to, I’ve been the guy complaining about the stupidity of the rating system for years. Therefore, this film didn’t teach me anything new, but it does entertain for the most part. If you haven’t noticed, films are rated arbitrarily and more for sexual content than for violence. This speaks to our generally conservative and sometimes backwards culture, where violence is more okay than sex for kids to see.

This film is great for the uninitiated to see the rating practices of the MPAA. The film and its director, Kirby Dick, are a bit extreme in their methods of obtaining the information for the film, resulting in something that will play well to people of like minds, but won’t necessarily sway combative viewers. It reminds me of Michael Moore’s films in this way, albeit a lot less well-made. It is interesting but a bit too long, check this one out if you’re in the mood for a bit of investigative journalism.