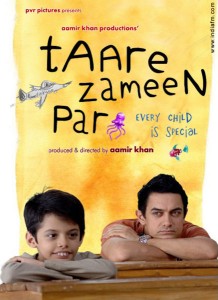 This is the first true Bollywood production I’ve ever seen and it was fantastic. The music in the film is memorable and interesting. I could not get the music out of my head for days after I watched it, even humming the main theme to myself as I did something hard, subliminally associating the music with overcoming obstacles. I cannot think of any higher praise than that for film music. Yes, there’s touching piano music but it is used well and there is an actual emotional connection and response underlying it so no complaints. It’s a bit of a misnomer to call this a musical though because rarely does the cast actually burst into song. Most of the musical sections are extended montage sequences cut to original songs, but there are a couple of traditional musical songs. The music adds another dimension to the film that couldn’t have been achieved without it.

The acting is great from everyone involved. In his first role, Darsheel Safary perfectly captures the soul of the frustrated child and his struggles will pull at your heartstrings. The supporting cast is equally good, with Ishaan’s parents and the boarding school teachers standing out from the crowd. I must single out Aamir Khan though. He plays the intuitive, new art teacher at the boarding school with passion and heart. When his character enters the film, it lifts the whole production up and he is a joy to watch. He’s one of those guys that makes it look effortless. I had never seen him before, which was all the more impressive. After doing some research it seems that he is one of India’s most famous and successful actors and it is easy to see why. Like Stars on Earth is also Aamir Khan’s first foray into directing. He skillfully handles his duties and presents us with a film full of emotion, struggle and heart.

The film is long though, you must be patient with it. You will recognize the root of Ishaan’s problem long before anyone on-screen does, but when they finally do it is gratifying. Most of the film is focused on this uncertainty, the question his parents and teachers have of why he is doing so poorly in school. They both decide that it is because he is simply a bad kid, so he is sent off to boarding school which ultimately becomes the best thing possible for him. As I said before, the film might be too long, but it is so satisfying, rewarding and uplifting at its culmination that I can’t imagine changing it. I don’t know that I would have felt such strong feelings towards the film had I not gone on the entire journey along with Ishaan. It’s nice to see a feel good film like this not strictly follow convention, but I wonder if a lot of impatient U.S. viewers will make it through the first hour or so to get to this place. I sure hope so. If you ever struggled in school, give this one a chance. It will whisk you right back to those tender, youthful days and make you appreciate and remember the power that teachers hold.