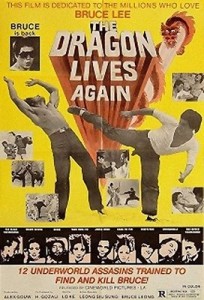 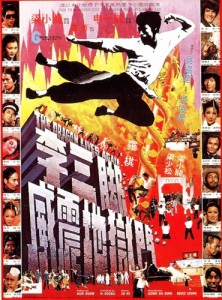 No, I am not on any stimulants or barbiturates. No, I am not making any of this up. There is a movie out there, existing among you and I, where Bruce Lee dies, goes to hell and fights a shape-shifting woman who creates the first erectile dysfunction drug. He teams up with Popeye, The One-Armed Swordsman, and Kwai Chang-Caine to protect the king of hell from being overthrown by The Godfather and his army of ragtag movie icons. Clint Eastwood (as The Man with No Name) and Dracula are in there, as well as Zatoichi the Blind Swordsman and ’70s euro-porn superstar Emmanuelle. Forget about all that crazy shit you read in my previous reviews… In the lexicon of cinematic weirdness, The Dragon Lives Again sits near the top, if not on the throne.

In The Dragon Lives Again, one sees Bruce Lee exploitation taken to its most decadent and self-indulgent extremes. Bruce Leong, who looks absolutely nothing like Bruce Lee, is actually pretty fun to watch in the lead role despite his lack of martial arts skill. The film itself is all over the place. Adherence to continuity and coherent storytelling obviously was not a priority here. In fact, it makes The Clones of Bruce Lee look like Wuthering Heights. I gave up even trying to find a plot about 20 minutes in and just settled for the raw, visceral impact of the strange imagery. 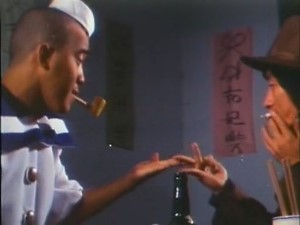 Seconds before the average human brain begins hemorrhaging I think it sees scenes from The Dragon Lives Again. I still can’t really piece it all together myself. I know Bruce Lee came back to life and there were guys wearing big horse head masks. I remember Bruce fighting Dracula and a bunch of guys in Cobra Kai skeleton suits. I know the Exorcist convinced Emmanuelle to murder the king of hell through intense and prolonged orgasm. These things I am certain of. Yet I can’t help but accuse my obviously disturbed subconscious of cooking these things up. I guess that is a testament to this film’s borderline psychological effect on the viewer. The line between the movie screen and the therapist’s chair becomes blurred and pretty soon you discover that ugly and long repressed link between Bruce Lee dick jokes and sex with your mother.

Regular visitors may remember not too long ago I reviewed a film called My Young Auntie. You may recall I had a serious problem with a particular party scene that was so beyond the realm of cognitive thought that I unfortunately had to pan the entire film. That was 10 minutes. Imagine that shit going on for 90+ and that will pretty much diagnose the gradual decent into madness and sudden loss of basic motor skills that this film spurred… Somewhere after 20 minutes chronic fatigue begins to set in. After 45 you become delirious and prone to hallucination. When it’s over and done with, you find yourself a crooked heap of bone and flesh-jelly. 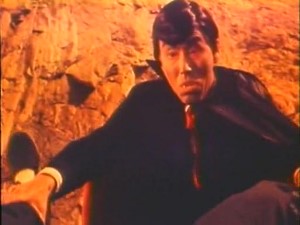 I forgot to mention, Popeye is played by Eric Tsang, a legitimate actor. I mean didn’t he win multiple Hong Kong film awards or something? He must be shitting himself on a daily basis knowing that somewhere out there, this film has been slowly filtering out to the general public through bargain bin Bruce Lee DVD collections and 9th generation pan-and-scan VHS tapes. A lot of people out there harbor some pretty deep secrets, but I’m sure Eric Tsang would almost wish he got caught furiously jacking off in the handicapped stall of a junior high school girl’s bathroom rather than have his contemporaries witness his stellar turn as Popeye in this bizarre piece of shit.

Think you’ve seen it all? I simply dare you to see this film and make that claim again when you’re finished with it. This happens to be one of the worst directed, acted, edited, written and put together films I have ever seen, yet you cannot take your eyes off of it. In that sense it’s kind of like a three-legged monkey… or at the very least a Dracula-spawned Cobra Kai.

I hope you enjoyed our fake Bruce Lee film festival here at Silver Emulsion. Although you will definitely see more Bruceploitation reviews here in the future, I’ll be back to reviewing just plain old movies that have absolutely nothing to do with Bruce Lee again on Monday.