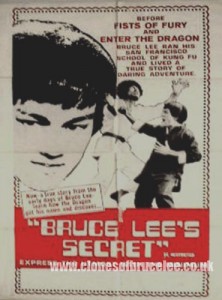 Bruce Lee’s Deadly Kung Fu is a pretty decent springboard into Bruceploitation cinema, if only because it carries most of the traits typical to the genre before it went absolutely apeshit towards the end of the ’70s (but we’ll get to that next week). You get your obligatory nunchaku scenes, your classic Bruce Lee training sequences that feature a lot of shots of Bruce jogging and lifting dumbbells, and plenty of grossly exaggerated facets of Bruce Lee’s real life. My favorite in this particular movie is when Bruce gets his ass handed to him by the baddest kung fu master in town, a guy so badass that he walks around with long curly locks, a pencil thin moustache, bare-knuckle gloves, and a Dracula cape. A distraught Bruce ventures to a secluded creek and has a meaningful flashback of his master, which compels him to create Jeet Kune Do.

The plot is basically lifted from The Chinese Connection, only this time set in modern-day San Francisco and with some pretty goofy looking Caucasians as the protagonists instead of the Japanese. Hell, even Paul Wei (better known as Interpreter Wu in The Chinese Connection) makes an appearance. Don’t be too shocked… often times the producers would hire actors who actually appeared in Lee’s movies in an attempt to legitimize their film. Most of the time they would play roles virtually identical to those that they played in the earlier films, as is the case here, with Paul Wei once again playing the traitorous Chinese who aligns himself with the racist Chinese-hating foreigners.

Li plays “Bob” Lee, a transparent carbon copy of Bruce Lee. In fact, the dubbers frequently forget this fact, accidently letting the name “Bruce” slip through on several occasions. He pals around San Francisco with his friend (Jimmy Lee Fong) and the two meet up with Carter Wong (best remembered as the thunder god with the big straw hat in Big Trouble in Little China). They fall into the ire of some syndicated, karate-fighting crime mob who hate Chinese people. Bruce — I mean Bob — quickly dispatches them with some Wing Chun techniques, so they run back to headquarters to tell their karate teacher, played by some Asian dude in blackface and a pretty nappy-ass afro wig. Bruce beats them again, and when the mob boss comes back from New York, he is furious. You can tell this guy doesn’t take shit because he curses a lot and has a scar on his cheek. He orders his army of karate fighting gringos to go all out and “beat the shit out of those Chinese guys.”

Despite being a decent example of the genre, the film itself gets pretty boring and repetitive from here on out. Bruce kicks the shit out of these guys and opens up a kung-fu school to teach foreigners, which only infuriates them more so he kicks the shit out of them again. Blah, blah, blah. Rinse. Repeat. The real winner here is Paul Wei, who steals the show with his fantastically flamboyant wardrobe that only gets more and more ridiculous as the film progresses. I thought the sequined gay-golfer uniform would be hard to top until he strutted out in the zebra striped jockey outfit.

If you’re interested in tracking this film down, a bit of a warning though. This movie is like most Bruceploitation flicks, which are notorious for being renamed and repackaged so many times, that often, nobody remembers what the original title was in the first place. You can find this film under at least half a dozen other names including Bruce Lee’s Secret, The Story of the Dragon, Bruce Lee: A Dragon Story, Bruce Li’s Jeet Kune Do, etc.

[Editor’s note: After scouring the internet for some poster images to use for this film, I happened upon a Bruce Lee Clone website that not only had the images I sought but also an extensive database of info on these forgotten films. It’s called The Clones of Bruce Lee and I heartily recommend you check it out if you enjoyed Uncle Jasper’s review.]