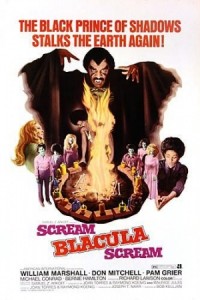 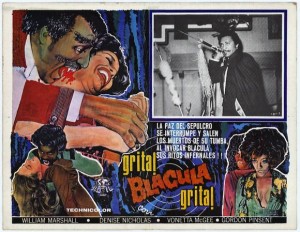 Lisa’s boyfriend Justin throws a party to display his impressive collection of African artifacts. This of course piques the interest of Blacula, who under the guise of his former identity of Prince Mamuwalde, shows up as usual in his full vampire getup. Look… by this time you just have to accept the fact that Blacula isn’t going to even attempt to conceal the fact that he is a vampire, and everybody is going to be completely oblivious to this guy poking around in his cape and the finest in 18th century fashion. He wows the partygoers with his remarkable knowledge of African history and is equally impressed by Lisa’s prowess in the dark arts of voodoo. She inspires him to cure his evil curse and forever rid himself of his vampire bloodlust through a voodoo ceremony.

Meanwhile Justin, who also happens to work part-time on the police force, pins the string of recent murders on Blacula. This leads to another classic “battle of wits” scene between Justin and Blacula that is just as good, if not better than the one in the first film. I think it’s safe to say that Blacula’s downfall will forever be connected to his insistence on getting mixed up with women who are involved with police investigators. This all leads to the exciting climax with Lisa attempting to exorcise the curse of Blacula from Mamuwalde while the police storm his mansion, fighting their way through his vampire horde. 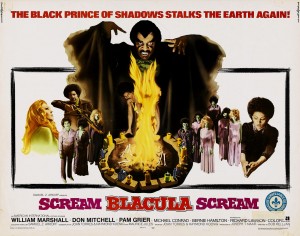 Also noteworthy is the aforementioned scene where Blacula finds himself wandering alone through a red-light district at night. He turns down the advances of a prostitute and then is accosted by her pimps. He delivers a powerful speech, condemning the pimps as “still being slaves, imitating their slave masters” before backhanding them through a window.

Overall the plot is thinner this time around, but the action, performances, and dialogue are up to par with the first film. All the wild voodoo stuff is fresh and welcome as well. Pam is always good, but some may be put off by her role here as the vulnerable female victim. Those looking for shotgun-toting Pam are best advised to look elsewhere.

Although other sequels were originally planned, this film would sadly mark the end of the Blacula series. It’s funny because as a kid, my only memories of William Marshall were his appearances on Pee-Wee’s Playhouse as the King of Cartoons. It’s only when I finally got around to seeing these films that I realized just what a terrific actor this guy actually was. He almost singlehandedly lent credibility and sophistication to a series of films that were never really intended to be as good as they actually turned out to be.