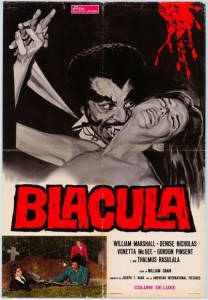 The couple lisp their way through embarrassing, stereotypically gay dialogue before stumbling upon a hidden room with an old coffin inside. They decide to pack it up with all of the other goods and ship it all back with them to…

So in case you were initially wondering… yes, this is how a 200 year-old black vampire finds himself in 1972 Los Angeles. With all of Dracula’s furniture boxed up and shipped safely to its destination, the gay white guy (who I forgot to mention is portrayed by the same actor who played the gay white guy in Friday Foster) decides to finally crack open the coffin. Yep, Blacula is awakened from centuries of undead sleep and feasts upon his first two victims.

Blacula, despite his unquenchable thirst for human blood, is actually a pretty nice guy and attends the funeral of the black guy he killed. Also attending the service are the man’s two sisters and his brother-in-law. Blacula takes special notice of the younger of the two sisters, Tina, because she is the spitting image of his Zulu wife from centuries ago. The brother-in-law, Dr. Thomas, is the film’s requisite bad motherfucker, down to the cleanly groomed sideburns and Richard Roundtree moustache. He introduces himself to the undertaker as a police investigator and takes a peculiar interest in the corpse, noticing the bite marks on its neck. He seems pretty hip to this vampire shit and begins an investigation immediately. 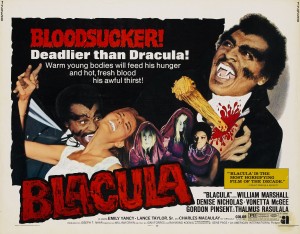 Blacula, meanwhile, is strutting around downtown Los Angeles in full vampire regalia and with enough facial hair to send Karl Marx into a state of apoplexy but nobody seems to take any notice. He goes on a nocturnal murder spree while stalking Tina and eventually placing her under his spell and wooing her. Hell, I was under his spell too. It really is a testament to William Marshall’s excellent performance, the man commands the screen and is anything but cheesy.

Blacula and Dr. Thomas are perfect foils for each other and in one of the film’s best scenes, the two find themselves sharing a table at a nightclub, smooth talking the shit out of each other, neither revealing their full hand, in a suave game of cat and mouse.

Despite the obvious trappings of novelty, Blacula works extremely well due to solid performances and an insistence on taking itself seriously. What could have easily been a camp film instead ends up surprisingly solid. The two leads are fantastic, but ultimately, this is Blacula’s show. The filmmakers were smart to never really paint him as a villain. The ending, which could have been a complete cop-out, is perfect and really brings Blacula’s tragedy full circle. This may be one of American International’s finest moments and is definitely a cornerstone in blaxploitation film.