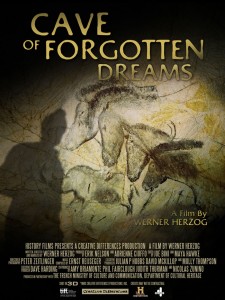 Expectations: I expect to love this.

Werner Herzog’s latest documentary is not nearly as eccentric and philosophical as some of the other films I’ve seen of his, but it is nothing short of a resounding success. Given unprecedented access to the Chauvet Cave in southern France, Herzog and his three crew members do their best to capture every aspect of the cave, visually, sonically & spiritually. Herzog even interviews a perfumer who may attempt to recreate the ancient smell of the cave’s interior for a reproduction being built at a theme park, but since the film is not in Smell-O-Vision, viewers are left to imagine the smell described.