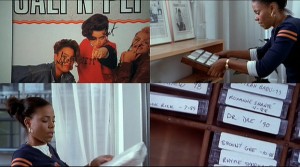 When writing a review I rarely think of the basic plot; it’s usually very typical. I am usually looking for unique moments that get me emotionally invested. My favorite quote is, “I’ve learned that people will forget what you said, people will forget what you did, but people will never forget how you made them feel,” by Maya Angelou. This sums up Brown Sugar. There are many forgettable moments in the movie, but the way I felt about the music as a metaphor to falling in love… well, it was magical!

The movie opens with a split screen of a woman packing the evolution of hip hop, through images of mixed tapes (Biz Markie, Monie Love, Angie B.), pictures of Boogie Down Productions, pictures of break dancers with Kangol hats and boom boxes, and posters of Salt and Pepa and Gang Starr. The song Love of My Life by The Roots is playing in the background. The song sets the tone of the metaphors that will become the basis of the story. Throughout the movie the main characters use hip hop music as a metaphor to their experiences and relationship. 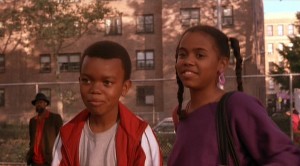 It’s all very reminiscent of my childhood. My brother, Quinton, and my sister Tamisha “Mimi” loved hip hop. Quinton carried on my mama’s tradition of playing music in the house. Sometimes when I play hip hop in the car from “back in the day,” I can see the shock on my son’s face when I rap. The lyrics are embedded into my memory, just like my childhood experiences with my brothers and sisters.

The next image is of the main characters Sidney “Sid” (Sanaa Lathan), and Andre “Dre” (Taye Diggs) as 10-year-old children. Sidney is narrating about the interviews that she conducts as an editor-in-chief of a hip hop magazine. Her first question to her interviewee is, “So, when did you fall in love with hip hop?” The scene reminds me of When Harry Met Sally. In WHMS throughout the movie they ask couples how they met and fell in love. It’s the same faces in Brown Sugar when a slew of hip-hop artists are giving real accounts of when they first fell in love with hip hop. Their faces light up as they tell us the name or location of when and/or where they were when they heard the song that hooked them. Sidney says she remembers the first day she fell in love with hip hop. It was July 18, 1984. It’s the day she heard three MCs: Dana Dane, Slick Rick, and Doug E. Fresh. Of course, this is also the day she met Andre “Dre”.

END_OF_DOCUMENT_TOKEN_TO_BE_REPLACED 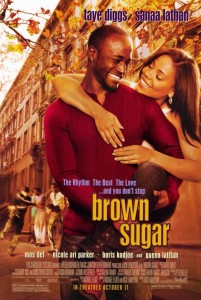