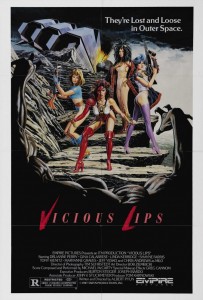 Coming at you like the love child of Purple Rain, Alien and Robinson Crusoe, Vicious Lips is not for the faint of heart. Not because of its over-the-top violence or its plethora of nude bodies. No, this one is firmly in the incredibly boring camp, but it’s the ridiculous WTF factor that makes Vicious Lips worth watching for B-Movie fans. The intergalactic girl band Vicious Lips is out one lead singer, but they’ve got the gig of a lifetime on the line. Matty, their manager, plucks a fresh-faced kid out of a high school talent contest and before she knows it, she off to fulfill her lifelong dreams. Along the way they crash land on a desert alien world and the cargo hold of their ship just so happens to be carrying a female killing machine, the Venusian Man-Beast!

The whole film’s story is pretty shoddily told from the get-go, with quick-cut editing and neon glows ripped directly from Prince’s Purple Rain film. This isn’t a bad thing, as I enjoy Purple Rain, but it’s nothing new. Director Albert Pyun does have an eye for quality shots and cinematography though, which isn’t enough to carry the movie, but it adds a lot more visual candy than I expected there to be. The music is also very enjoyable for fans of 80s music and it’s an absolute crime that a soundtrack was never made available.

For all its faults, Vicious Lips surprisingly wraps itself up pretty well and pays off better than expected in the end, with a finale so triumphant and enjoyable that I couldn’t help but be enamored with the movie, despite being bored throughout nearly its entire runtime. There’s not a lot that I feel needs to be said about this one, it’s awful but oddly enchanting for 80s music and B-Movie fans. There’s also a brief glimpse of a triple-breasted hooker a few years before Total Recall, though I doubt this is the first on-screen appearance of an accessory breast (yes, that’s the real medical term for it).

Director Albert Pyun is known for being in a similar class with the madcap genius of Ed Wood, and Pyun showcases why in Vicious Lips without a doubt. He later went on to direct one of my favorite Full Moon flicks, Dollman, so I’m definitely interested in checking out more of his work, especially his first film The Sword and the Sorcerer, a low-budget 80s sword and sandal epic made in the wake of Conan the Barbarian.

Next week I’ll launch into another of Full Moon’s big series, the vampiric tale of Subspecies!