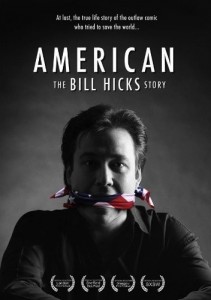 Bill Hicks is fucking awesome and if you dig stand-up comedy in any meaningful way, you should already know the name and be familiar with his work. If not, he’s one of the best there ever was. Hicks elevated stand-up to levels previously undreamt about by mainstream comics, pushing boundaries way past the bleeding edge. At his core, he was a thoughtful, logical man who threw everything he had up on that stage and American: The Bill Hicks Story seeks to let you in on how he came to be that man. Mostly it succeeds, but as much as I love Hicks and the experience of watching this movie, I can’t let my feelings override the glaring problems I had with the film at a structural level.

There’s an odd choice made by the documentarians to focus on audio-only interviews of his family and friends, instead of traditional video interviews. While they’re talking, still photographs are animated into whatever scene the interviewee is describing. It took a while for me to come around to this style, and while I eventually was OK with it, I never really liked it. It creates an odd disconnect from the person speaking and unless you’re extremely good with placing a voice to a name, you’re going to lose track of who’s who. Bill Hicks, via these animated pictures and live video footage, is always front and center and the film takes on something of a video shrine to him instead of a true documentary. Then in the final few minutes of the film, the filmmakers break character and finally show the people who’ve been narrating our experience. The only problem is that besides Hicks’ mother, I have very little idea who everyone else is, unless their current look unmistakably resembles all the photographs we were shown from the 70s and 80s. They also never flash the person’s name on the screen when they’re talking, so we literally have no help in this regard.

Despite this, the film succeeds as a document of the legacy and power of Bill Hicks’ stand-up act. It follows a very linear path from Bill’s childhood to his death, so you do get a great sense of the overall arc of his life, and some of the twists and turns it took along the way. I greatly enjoyed the film, but a lot of that enjoyment is just discovering bits and pieces of what made a guy I greatly respect who he was. Hicks was the man, and this documentary only seals that fact deeper in my mind. If you’re unfamiliar with him, I’d definitely watch a couple of his stand-up sets before hitting this doc up. I highly recommend his HBO One Night Stand set, currently available on Netflix Instant as Episode 1 of the series: Bill Hicks Live: Satirist, Social Critic, Stand-up Comedian.