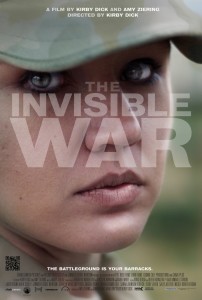 A good documentary will try to educate its viewers about a certain topic, or seek to raise awareness about an issue that’s flying under most people’s radars. An excellent documentary will do both, and The Invisible War is that documentary. I went into The Invisible War with an idea that rape in the military existed, but I had no real knowledge of how widespread it is, or how the military judicial system works (or doesn’t work). I came out knowing a lot more about these issues, and in terms of raising awareness, I don’t know that I’ve ever been more angry while watching a documentary. The idea that servicewoman (and men) are subjected to such fucked up treatment is absolutely infuriating, and the fact that their cries for help go largely unanswered, sometimes resulting in the victims being persecuted again by the system, is arguably worse than the original crime.

The military’s justice system is much like the Catholic church’s; they have their own system in place to combat crime and deal with it (or not deal with it) however they see fit. Crimes that happen within the military are handled solely by the military, so instead of an impartial investigative organization overseeing everything, oftentimes the perpetrators themselves or their close friends are the ones in power over the investigation. This creates an extremely hostile environment for reporting crimes of this nature. In the months following the release of the film, action has been taken to change how the military handles these crimes, which is a great step in the right direction, but there is always more to be done.