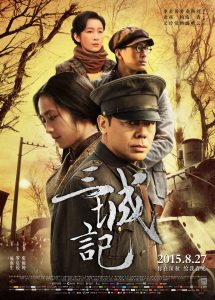 A Tale of Three Cities is a gorgeous film that packs in as many beautiful images as it does heartbreaking scenarios, which is to say there are a lot of both. 🙂 Personally, I felt that certain moments could have been explored in more depth to heighten the experience and our connection with the characters, but in a film hoping to relate a true story filled with many twists and turns along the way, things like this are bound to happen. One particular life or death moment for Fang Daolong continues to bother me, though, and the way Cheung handles it feels like a clumsy misstep in a film otherwise self-assured. It is her choice, though, and I didn’t see any other reviews mentioning it so perhaps it’s just me. The film tells its story quite well given the amount of plot points it has to juggle to get our characters to Hong Kong from where they start, and it is always an involving film to watch, but I do think it’s a bit too detached emotionally to rate any higher than three stars for me.

The story of Fang and Chen is an incredible journey of love, survival and struggle during wartime, but what really makes it especially interesting is that it’s also a sort of template story for many people during this time in China’s history. Hundreds of thousands of people fled mainland China during the Second Sino-Japanese War, and later the Chinese Civil War, with many of them seeking refuge in Hong Kong. A similar journey is shown in the Ip Man films, and stories like it come up throughout Chinese cinema. At any point in their journey, Chen and Fang could have been killed or diverted onto another path in life, so to see them meet and part ways again and again only adds to the astounding quality the story holds. The film portrays the couple of Qiu & Hua (Qin Hai-Lu & Boran Jing Bo-Ran) in a similar manner as a counterpoint to the main story, and we see firsthand how different things could have been if any one moment occurred differently in their lives.

This quality of life is a funny one that offers endless possibility for thought and examination, because who is to say what might have been if any one event, even those seemingly minor, went a different way. The fact that this particular couple went on to have a son together after reaching Hong Kong, and that he would eventually become one of Hong Kong’s most famous and treasured sons only adds more fuel to the fire. Of course, the film is focused on the parents’ journey, but after the film presents us with a photo of baby Jackie, it’s hard not to consider what the Hong Kong film industry might have been like if Jackie was never a factor in it.

If you are interested in Chinese or Hong Kong history, I don’t know that A Tale of Three Cities will leave you with much understanding of the conflicts that its characters lived through. It does showcase the magical chaos of life rather well, though, in a loving, romantic, well-acted tribute to an incredible story. I don’t know that every Jackie fan will find the film entertaining, but anyone curious to know more about his background will find a lot to sink into with A Tale of Three Cities. I still think I’d recommend the documentary Traces of a Dragon over this, but that choice is up to you.

Next up in this chronological journey through the films of Jackie Chan is the relatively recent film Skiptrace from 2016! See ya then!