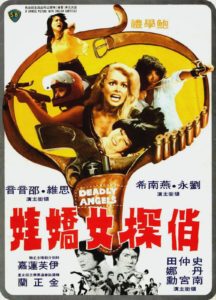 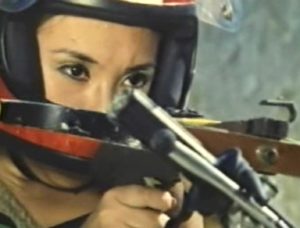 The problem is that the heights are not the majority of the film. The story is pretty standard and without much innovation, and the rest of the movie just doesn’t deliver enough consistent intrigue. As with all movies I watch dubbed and in poor quality prints, it’s possible that my detachment made me miss a lot of key elements. I can only report on what I experienced, though, and it was definitely far from an ideal time at the movies. I was so disinterested in the story that at a certain point I gave up and just waited for the next action scene. It’s clear from the intro that our heroes will enter the criminal organization as showgirl drug runners, so when all that takes a fair amount of time to happen, I couldn’t help but be a bit bored. Perhaps a re-watch would fix this, but I’m inclined to think I’d still have the same problem. If I was a kid in the early ’80s with access to only Deadly Angels and a few other VHS tapes, I’m sure I’d develop an affection for the film, but in 2018 with literally thousands of movies at everyone’s fingertips, it just doesn’t have the same impact. 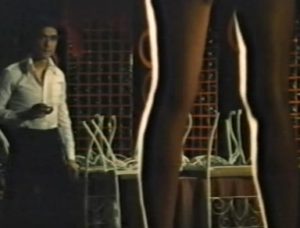 The film does have its moments, though, and they are almost entirely during the film’s action scenes. Whenever the names Yuen Woo-Ping and Tang Chia are listed as action choreographers you know you’re in for something worthwhile, and the offerings in Deadly Angels are pretty fun. The full-screen print kills a lot of the editing and the ability to effectively track the action, but this is hardly their fault. What you can see is full of high-kickin’ action featuring the female warriors and their main martial co-stars Lau Wing and Shut Chung-Tin. The supporting cast is filled with a bunch of greats like Lee Hoi-Sang, Yuen Biao, Fung Hak-On, Huang Pei-Chih, Chan Shen and Corey Yuen, too. They aren’t used to their full potential, but it does add a bit of “Oh shit, it’s _____!” which always spices up an old film. I don’t have anything deep or insightful to say about the choreography itself, but that’s kind of how the movie is.

Deadly Angels is meant to be a fun exploitation action film, and it never reaches any further than those goals. It does manage to inject a real brutality in its moments of extreme violence, though, further amping up the exploitation factor. It’s common to see an injured man with incriminating information killed in his hospital bed by a disguised nurse, but the way it’s done here has to be one of the most fucked up deaths I’ve ever seen on film. These vivid moments, coupled with the film’s “Girls with Guns” theme, makes Deadly Angels a worthy film for Hong Kong fans to seek out, even if it isn’t an especially great movie.

Next up in this chronological journey through the Shaw Brothers Martial Arts catalog is The Naval Commandos, directed by Chang Cheh (with Pao Hsueh-Li, Wu Ma, and Liu Wei-Bin pitching in, as well)! See ya then!