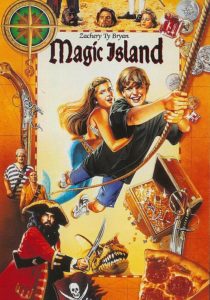 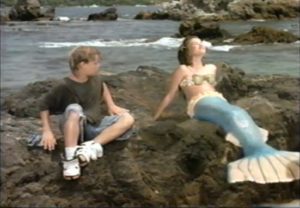 The base premise itself is nothing new for Moonbeam, but the specifics are unique and that alone makes Magic Island an interesting movie. It also contains a lot of imaginative elements, such as a mermaid character, pizza trees and talking statues. But what it doesn’t have much of, unfortunately, is charm, so the film plods along with a bevy of annoying characters occasionally running into a fun concept or situation. It’s also highly geared towards comedy, and it rarely, if ever, achieves anything worth a chuckle. If I were a kid, things would probably be different, but those days are gone so I can only call it like I see it. Magic Island carries a highly juvenile vibe that’s kinda Troma-esque (without the gross-out debauchery of Troma, of course), complete with dopey sound effects and overblown, cartoony characters doing horrid accents. Even just recalling the accents to write that last sentence, I kinda winced.

Director Sam Irvin does his best to liven the film up as much as he can with clever angles and a lot of well-used moving camera. It helps the film from getting too stale, but without any real narrative content to back it up, it doesn’t necessarily serve any purpose. The story arc with Jack and his mother is only really engaged during the bookending scenes, too, so everything in the middle is just a series of pirate cliches strung together to form a meaningless adventure that should be fun but isn’t. Regardless, though, Irvin must be commended for at least making Full Moon films — he also directed Oblivion and its sequel — that were different from the tons of other stuff the studio cranked out. 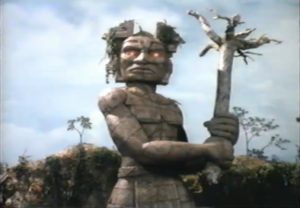 This general feeling of disappointment that runs through my review held firm until the last 20 minutes of the film, when all of a sudden some amazing stop-motion blasted onto my screen and completely shocked me! The journey had taken the characters to a stone temple where the treasure is held, but first they have to deal with a giant stone guardian! It’s awesome! The effects are really well done, too; the movement is incredibly fluid and the integration with the background and the actors is great. I could tell that it wasn’t traditional stop-motion work, so I did some searching to uncover the process used. Turns out it was Dynamation, a technique designed by Ray Harryhausen, and according to the website of Joel Fletcher (the film’s FX artist in charge of this scene), it was also the last film to use the technique! If only the film had the budget behind it to include more FX like this.

As a kid I used to look at a closed book on a shelf and marvel at how this small block of paper contained entire worlds and characters so rich that I felt like I actually knew them. A similar idea is at the heart of Magic Island, and while they never really engage it directly, I respect that the idea is here if someone wants to pick up on it for themselves. Books are a wonderful way to escape, while also learning about yourself and the world you live in, and the hopeful part of me would like to think that a few kids started reading and discovering the world because of this movie. 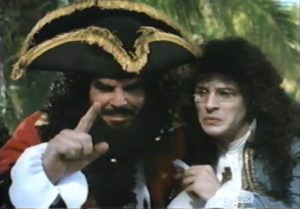 I didn’t really connect with Magic Island, but it’s not really a bad movie. It’s more annoying than anything else, but I can’t deny that I’d rather watch something weird and unique like this than any of the Pirates of the Caribbean films.

I’ll leave you with my favorite line from the film, when Jack first arrives on Magic Island and meets the good guys.

“We are Buccaneers.”
“To me, you kinda look like a grunge band.”

Huh? Did I miss something, or did grunge bands dress in ruffled, pirate shirts? Hahahaha. 🙂

Next time I get around to a Full Moon movie I’ll be watching the 2002 film Groom Lake, starring and directed by William Shatner! I’ve been holding back on this one a while, so I hope it lives up to my personal hype. See ya then!