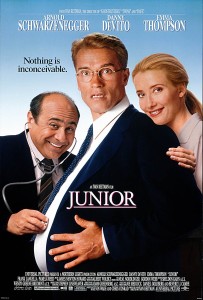 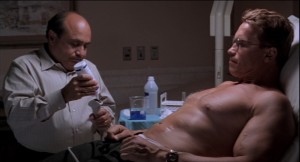 Watching Junior with an open mind was a fun, heartwarming experience, to the point of almost being moved to tears during the closing scenes. The film isn’t any less absurd or preposterous, but when allowed to do its thing, Junior does it effectively. What really struck me was how good the acting was from the main four of Arnold, DeVito, Emma Thompson and Pamela Reed. They create characters that transcend their thin writing and are fun to spend time with. Junior follows a very predictable path, but I was so happy to see how the characters came together in the end that knowing where it was headed didn’t diminish the joy in any way.

Arnold’s acting is worth special mention, as he carries the whole movie on his ability to take his character through the arc necessary for the film to work. He begins the film as the stoic Austrian doctor who is basically a blank slate of a character. He’s reserved and protected with his emotions, everything is all bottled up and controlled. As the pregnancy and the hormone therapy progress, Arnold slowly and subtly adds in more and more emotions to his character portrayal. It’s a very gradual change, and the Arnold that closes the film is remarkably different from the Arnold that opens it. 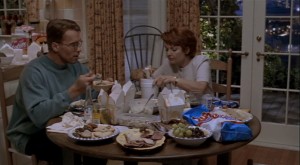 Junior is billed as a comedy, but I found it more charming than hilarious. Sure, there are really funny bits about Arnold’s sensitive nipples, or crying to the commercial about a dad giving away his daughter at her wedding, but overall I was smiling a lot more than I was laughing. Junior doesn’t really go for the cheap laughs that you might expect with such an absurd premise; it actually takes it all fairly seriously, outside of the whole flawed logic thing.

I don’t know that my review will convince anyone to sit down with Junior, but it is definitely a film that doesn’t deserve the bad rap it has. If you push aside that it’s physically impossible and ridiculously absurd, and that it’s a much more serious film than the premise would initially suggest, Junior is a very charming, well-made film.

Next up in this chronological journey through the films of Arnold Schwarzenegger is Chuck Russell’s Eraser! See ya then!