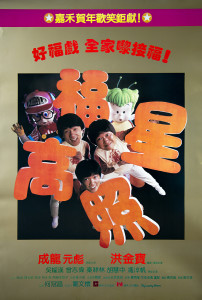 I’ll let that sink in.

Yep, Jackie Chan is a god among men, and what was even more impressive to me was his descent just a minute or so later. Can you even imagine an American star having these kind of balls? Not only is it impossible to imagine, but this is also Exhibit A in my case against CG stunts. Why should I care if some human-shaped pixels fall a couple of stories through some window-shaped pixels when I’ve seen shit like Jackie Chan climbing up and jumping down from a working Ferris wheel? There’s a reason no one has stepped up to take his throne — no one is crazy enough to do this kind of stuff! 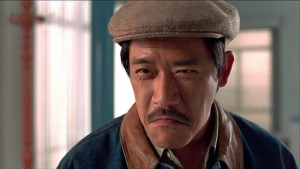 Anyway, after this incredible and thrilling introduction to the film’s story, we shift into Lucky Stars mode as Sammo must assemble the guys to go help Jackie in Japan. It’s sort of similar to the sequence in Winners & Sinners that brings the guys together in jail — where everyone is given a funny scene that sets up their character — except in My Lucky Stars they already know each other and Sammo is slowly rounding them up. They are essentially the same characters with slight variations. The biggest change is that Stephen Fung is no longer a cop, and now Sammo is the leader of the group, but Charlie Chin is still a classy thief and Richard Ng is still trying to learn ESP. John Shum Lo is also replaced by Eric Tsang, who plays a dopey guy that has no clue how dumb he really is.

Just as before, these characters are fun to spend time with. I suppose that will depend on the viewer, but I enjoy their antics together. They remind me of The Three Stooges, but there’s five of them and they aren’t so violent with one another. The group’s focus for most of the movie is trying their best to hook up with the new sixth member of the group, the undercover policewoman Inspector Woo (Sibelle Hu Hui-Zhong). The guys go to great lengths to get close to her and take advantage of the situation, so much so that it goes past the point of being funny and I really started feeling bad for her. At one point, the guys’ sexual frustration even goes as far as a gang rape suggestion! :O I imagine this film has a slim female fan base because of this lecherous sub-plot. 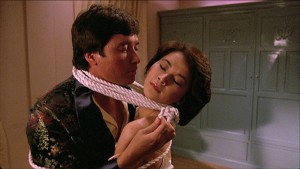 By far the funniest scene in the film comes when the group visits a Japanese restaurant, and the only way they can communicate with the waiter is to act out what they want to order. None of them want anything simple, either, so watching them try to act out something like Spaghetti Carbonara or a Club Sandwich is really entertaining. The best bit comes by way of Eric Tsang, though, and from what I understand it’s also a joke that was altered for the UK version of the film. So if that scene ends with a plastic frog, know that you’re watching an altered version of the scene. I found this out while looking up info on the film, and considering how much I laughed at what he is served in the HK version, I can’t imagine a plastic frog being anywhere near as funny.

Like the intro, the rest of the film’s action is top-notch work. Sure, none of the fights take on the ferocity of the Jackie vs. Benny the Jet battle in Wheels on Meals, but I think this was a wise move for a film that came out so close to that one. And since this is a Lucky Star movie and not a Jackie-focused one, it makes even more sense that the action would be a little more scattered. But don’t worry, Jackie’s athleticism is on full display. Coupled with the sumptuous, colorful visuals and Sammo’s rock-solid editing & camerawork, the finale in the funhouse is fantastic and truly something to behold. I especially dug the unique, upside-down-room fight, but the whole thing just sings. 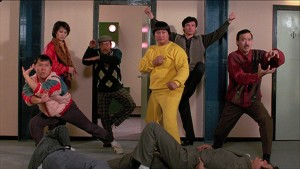 I also want to focus on the more commonplace stunt work that happens within the fights (as well as many of the HK action films of the ’80s and ’90s). There’s a moment during Jackie’s battle with Dick Wei where Jackie sweeps Wei off his feet. Dick Wei falls to the ground in a heap, and the power in this simple image of a man falling to the ground felt profound. This isn’t the only time we see something like this either; just a bit later Sammo grabs a dude and full-on body slams him into the concrete floor. These moments of obvious pain and brutality go a long way to further involve the viewer, as no one can deny the reality of what they’re watching. It’s this kind of tangible quality that’s missing from so many action film these days.

My Lucky Stars isn’t quite as funny as Winners & Sinners, and since a majority of the runtime is devoted to comedy, that’s why this one is only three stars. But the action is brutally brilliant, and when it’s funny it’s exceptionally so. If nothing else, it’s just great fun to see all these Hong Kong stars together in one film, clearly having a great time. There are certainly better Jackie/Sammo/Yuen Biao team-up films, but the action makes this one essential viewing for any Hong Kong action fan.

Next up in this chronological journey through the films of Jackie Chan is the sequel to My Lucky Stars that came out only six months later: Sammo Hung’s Twinkle Twinkle Lucky Stars! See ya then!