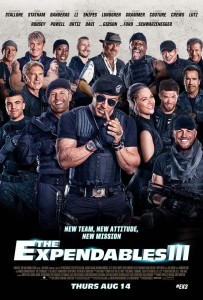 [I’m going to ruthlessly spoil this movie’s thematic journey, and it’s a worthwhile journey if you have an affection for the ’80s glory days of action. There is also the chance that this review will make my love of ’80s action movies seem like a cult-like religion to anyone that doesn’t feel similarly.]

OK, so where was I? Oh yeah, I was talking about how Expendables 3 has heart, of all things. And, get this, it’s a good part of why I really enjoyed this one! I have a sneaking suspicion this is exactly why a lot of people didn’t like it, too, because it all hinges on the inclusion of the younger members of the team, although I should probably just try to explain my own feelings. Anyway, like a lot of these “old man action movies,” Expendables 3 makes sure you know that its stars are old… Stallone, in particular (who just turned 69!). There are mentions of him having a stroke, jokes about cancer, etc. You get the picture. He represents a dying breed, not just in the Expendables world, but in ours as well.

In the opening action scene — well, actually the action scene directly after the opening action scene 🙂 — one of the most important members of the team is gravely injured. Confronting the group’s mortality shakes Stallone to his core; this kind of thing never happened to his kind of heroes back in the day. The world is changing. He doesn’t want to see any more of his buddies in this condition, so he decides that instead of embracing the past like he’s been doing, he should ally himself with the new generation of mercenaries, which are truly expendable to him. This is all true of the Barney Ross character, but for me the real resonance comes when you think about these themes as they relate to Stallone himself, and the action genre as a whole.

So Stallone hunts down a tech-savvy team of modern upstarts to fill the boots of his veterans. These “kids” will do the job, and they will do it well, but their style is completely different. Their characters are all rather bland, and in this case I’ll chalk it up to the writers wishing to drive home how modern action stars are without any sort of on-screen persona. When you went to a Stallone or an Arnold movie back in the day, there was an attitude that oozed out of the screen from them. Their characters were larger than life, but their actions were still within the confines of reality. Now it has flip-flopped with the proliferation of CG: modern action characters are flat, lifeless and closer to reality, but their actions are wildly over the top and capable only in the realm of CG fantasy. This reflects the current generation, and how so many people are locked into computer screens playing fantastical video games and hiding behind avatars.

As you might expect, Expendables 3 brings these two sides together in the form of mutual respect. The “kids” learn that the ’80s way of doing things still gets the job done in thrilling fashion. When tanks start shelling the building you’re in, any kind of carefully planned strategy based on high-tech 3d blueprints goes out the window (and explodes). One of the modern characters (Kellen Lutz) is even tasked with a few on-screen “real-life” stunts on a dirt bike, showing that he has come to embrace the over-the-top ’80s method of hitting the enemy head-on, guns a-blazin’.

Likewise, the ’80s guys learn respect for the modern ways, because without them they’d all have been toast. There’s the obvious part when the super tech kid must use a wrist computer to “block the signal” to stop the C4 from exploding, but for me the culmination of this theme comes a bit later. In the climax, Stallone is placed into the position of running from the most ridiculous and wildly unbelievable “CG building disintegration that the character is just one step ahead of.” I chose to buy into it because my estimation of Stallone’s on-screen persona has basically led me to believe he can do anything, even within this clearly modern context. But regardless of whether I bought into it or not, for me it represented Stallone’s respect for the modern way of doing action films.

It was immensely satisfying to see these themes play out so well in a simple “blow shit up” film. Both groups of characters realize that they can never be anything but themselves, but that some adaptation to their basic principles isn’t necessarily a bad thing. And by God, the film’s final scene, which skillfully brought all of this together, nearly moved me to tears. Jason Statham says Stallone is like a father to them all and Stallone affectionately puts his arm around Statham, while the “kids” karaoke an expertly placed Old Man by Neil Young. In this moment, all my love for Stallone and Arnold and the ’80s action movie genre welled up inside me like a big ol’ slo-mo explosion. Expendables 3 not only entertained and satisfied, it actually made me love the heroes that defined ’80s action movies even more, which I didn’t think was physically possible.

These days I don’t really have time to review movies outside of my ongoing series, so if I had known that Arnold was only in Expendables 3 in a glorified cameo role I probably wouldn’t have watched it in my “reserved for reviewing” time, but I’m glad I did. Especially since so many people seem to dislike this movie. It’s definitely a long film, and it meanders a bit here and there, but it’s a grand tribute to the ’80s glory days. This would be a fantastic note to end the franchise on, but I’ll honestly be quite sad if Stallone doesn’t keep it going for at least one more.

Next up in this chronological journey through the films of Arnold Schwarzenegger is James Cameron’s True Lies! Didn’t I say that at the end of my Last Action Hero review? Well — I lied. See ya then!