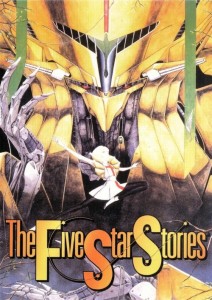 The film is supposed to be a mecha action story about cyborg girls designed to essentially be the computers for the giant robots, called Mortar Headds, and the guys who pilot them, called Headdliners. They’re also apparently super-powered enough to outrun most land vehicles on foot, but not powerful enough to stop a gang of random thugs from knocking them unconscious. The two girls the film centers on are Clotho and Lachesis, who have been given actual human emotions rather than just turned into mindless puppets. They are named after two of the three Greek goddesses of fate, with the eldest sister, Atropos, appearing for about 20 seconds and contributing nothing. The girls are, for some vague reason involving intergalactic law, trapped by some asshole with too much money who wants to keep them for himself, apparently just because they’re hot. 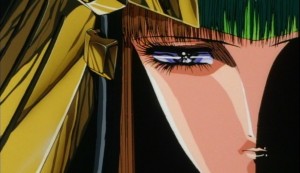 There’s going to be a ceremony to show the girls off, and everyone who’s anyone is attending. Most notably Ameterasu, some big shot from somewhere important who has four badass bodyguards in big concealing robes, so you know they’re going to kick a ton of ass. Ameterasu really confused me as the film refers to him as male, despite the fact that not only is Ameterasu the sun goddess in Shinto mythology, but he looks and sound exactly like a woman in the anime leaving me to wonder if it was just a translation error. Then there’s the main character, Ladios Sopp, who is the girliest man to ever be born.

The plot revolves around Ladios trying to rescue the girls from enslavement and then branches out into a poorly explained political takeover, as well as Ladius’s mysterious past, which involves the three sisters and some unresolved emotional conflict. Ladios also teams up with another guy with a mysterious past. All this mysterious past crap really only serves to make the film more confusing than it already is. Even a straightforward explanation of things would still have been a difficult task under the time constraints of the film, but trying to juggle all the different relationships while playing guessing games just makes the whole thing nearly incomprehensible.

Now what about all this mecha action? Well, there’s not much of it. There are a few action scenes, but most of them have nothing to do with giant robots at all. There is only one brief robot fight, and it ends with a simple giant gun that blows up everything. I suppose it’s suitably dramatic, but it really doesn’t make the film worth it. The other action scenes are pretty average as well. They aren’t bad, but they just don’t capture the thrill and excitement you want from a good fight scene.

The film carries a sense of prophesy and epic deeds that attempt to give it gravitas, but only served to alienate me further from the story and the characters. Its mythic tone might have worked had it been in a long enough format to carry the weight of its ideas. Sadly, it felt more like a teaser trailer for a much longer film rather than the actual thing.