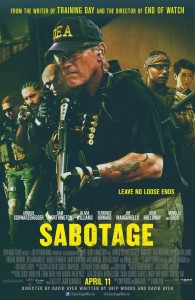 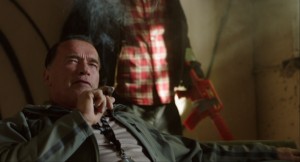 It’s a good thing I’m able to look past shit like this nowadays, because otherwise I might not have made it past the first 15 minutes. You (or I…) could make the argument that my time would have been better spent elsewhere given this film’s disregard for basic logic, and those who care about doing such things probably shouldn’t be watching anything like this anyway. Sabotage may present itself as a smart action drama with a somewhat mysterious, convoluted plot, but at its heart it’s just a dumb action drama with a lot of guns and violence like all the other movies in the genre. This is an important thing to be aware of going in, so that you can enjoy the film as best as possible.

What Sabotage offers the Arnold fan is a look at a slightly different side of Arnold. Often in his action films, Arnold plays the general screen persona of Arnold more than he plays a specific character. For instance, there isn’t much to differentiate his characters in Total Recall, Commando and The Running Man (just to pull some off the top of my head), and while each character has their own quirks, we still get more Arnold than we do characters (i.e. one-liners, an “I’ll be Back,” etc.). Sabotage doesn’t really give us this persona, beyond a few chances for Arnold to look dope smoking a cigar. His character here is more nuanced, dealing with his feelings internally more than through direct action. I wouldn’t call his character all that developed or anything, but it’s definitely a different turn for Arnold. You could blame his age for this, but it’s probably more to do with the fact that he has a team in the film. 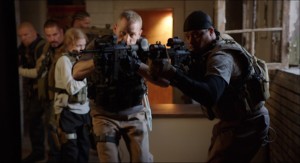 If there’s one thing I love about Arnold films, it’s that there’s usually a lot of “Arnold alone against a bunch of dudes” situations, but the way Sabotage is written — with a focus on the team more than Arnold, even though Arnold is the lead — there’s virtually no room for this. Sabotage isn’t really a “solo Arnold” type of movie, but that’s not the point. Predator shows that Arnold can exist within a team and still showcase himself, but in Sabotage the team only gets in the way of the film’s success as a smart action drama. Imagine a movie where the team from Predator, or a similar team of cool action movie meatheads, got involved in a web of intrigue that involved members of the team being outsmarted. They’re meatheads remember, so their usual response to things they don’t understand is yelling and general displays of testosterone (be it brawling, preening, shooting down an entire forest with a mini-gun, or other similar displays of dominance). Their strong suit is not being involved in a thinking man’s game, so when members of the team in Sabotage turn up dead and questions of who stole the $10 million come up, it’s just a lot of scenes of hot air. 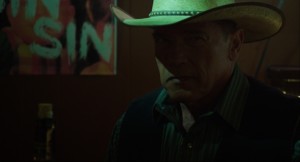 You can easily forgive this kind of thing in a film that’s inherently fun and action packed, but Sabotage is really neither. There’s very little action overall, especially in the film’s mid-section, and because the tone is so intensely serious it’s hard to have fun with it. It’s just a hard sell to attempt engaging drama with a cast of meathead characters, although I will say that the actors all do as good a job as can be expected. The issue is not with them but more with the writing. We don’t get the sense that any of them are quite smart enough to get away with anything, and the final reveal comes off as even more ludicrous than I’m sure it was intended to be. Sabotage does make me re-think my opinion of Sam Worthington, though, as he actually showed quite a bit of emotion. Previously, his other roles convinced me that he was an android experiment, but maybe they just installed an emotion upgrade or something.

For the hardcore Arnold fan, I’d definitely say that Sabotage isn’t a waste of time. Arnold is allowed to show off a different side of his acting abilities and he pulled it off rather well. By taking this role, I feel like Arnold is attempting to show his fans (and presumably Hollywood) that he’s not just interested in basking in whatever sunshine remains from his pre-Governor career; he’s actually trying to break new ground and open himself up to roles you wouldn’t necessarily expect him in (which is basically the exact opposite of The Last Stand). This is noble and interesting, but I just wish Sabotage was a better movie.

Next up in this chronological journey through the films of Arnold Schwarzenegger is Total Recall, blasting the series into the ’90s! See ya then!