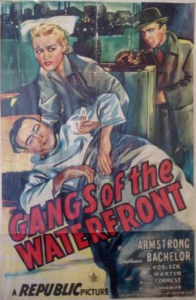 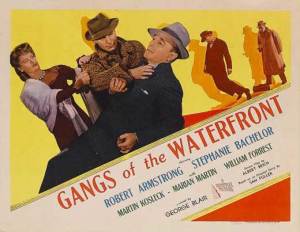 So yeah, this is basically any ol’ low-budget gangster movie with a foghorn over it. Boo! The characters aren’t anything special, nor are the performances. This film does seem to be better produced than Gangs of New York, but there is a difference of seven years between them, so that’s probably more a sign of the times than anything else. What really sets Gangs of New York apart as the better of the two is its willingness to craft a story without much real-world logic. There’s some of that spirit still evident in Gangs of the Waterfront, but it’s hardly enough to matter. For example, consider how the gangster being impersonated is handled in each of the films.

In Gangs of New York, the gangster is placed into prison, and while there he’s switched with the FBI man who looks just like him. The warden then places the true gangster into a special cell… concealed behind a hidden panel in his office! Huh? It’s more Bond movie than ’30s gangster flick, and it added a level of whimsical fun to the film’s setup. In Gangs of the Waterfront, the gangster is returning home from a hunting trip when he crashes his car. He wakes up in the hospital, badly injured and in no shape to do much of anything. Upon hearing this, the city’s policemen recall a taxidermist who once offered to impersonate the gangster, so they call him up and switch him with the criminal at the hospital. The gangster, meanwhile, just stays in his hospital bed with a guard outside. Boring! 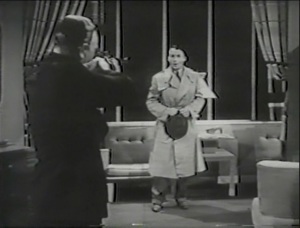 There’s a lot of conniving and gangland maneuvering in Gangs of the Waterfront, but all that happens through dialogue, which isn’t all that engaging or exciting. The film picks up the pace quickly in the third act, but by then I was too disinterested to really care. Thankfully, the whole movie is only 54 minutes long (although it feels much longer), so it really doesn’t waste too much time getting where it’s going. Also I feel like I should say this about my experience, even though it’s completely unfair to the movie, but I just finished Season 2 of The Wire, which revolves around a corrupt dockworkers’ union, so there was no way for this movie to live up to the level of high-quality waterfront storytelling I had recently experienced. Anyway…

I can’t really recommend Gangs of the Waterfront, but if you’ve seen Gangs of New York and liked it, it might be worthwhile to track down this follow-up/alternate version of the same story. Sam Fuller wrote the original scripts for both films (which were both re-written before shooting and directed by others), but neither really showcase his ability to craft unforgettable films.

Against all the odds, Gangs of the Waterfront does end on an especially high note, and it’s one that I’d have never, ever, in a thousand million billion years seen coming. The last shot of the film features a stuffed gorilla in the window of the taxidermy shop winking to the camera. If nothing else, the film has that going for it!