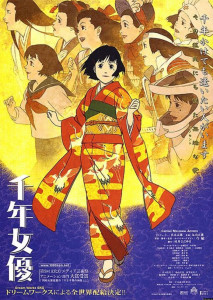 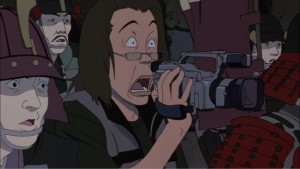 But that is really just half of the equation. The flashbacks also play out as if they were scenes from Chiyoko’s films, with the principle characters in costume, acting out the roles of her films. Those films encompass a variety of period dramas, a sci-fi space travel film, and even a kaiju film for good measure. So the story of her quest to find the mysterious artist that captured her heart unfolds to the backdrop of ninjas and samurai and bombed-out cities.

It leaves you wondering constantly just where the line between reality and fiction lies. Are all those struggles real, just dressed up in period clothing? Or are they metaphorical struggles that capture the emotions of her struggles while also showcasing the history of Chiyoko’s films? It is pretty much impossible to say, but it is always as fascinating as it is bewildering. This film constantly left me saying, “I have no idea what’s going on, but I love it!” 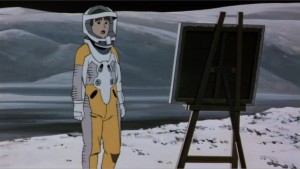 The film also surprised me with something that was almost entirely absent in Satoshi Kon’s first film Perfect Blue, and that’s humor. Woven into the narrative so subtly and so seamlessly are little jokes and visual gags that spontaneously appear out of nowhere and vanish just as quickly, leaving laughter that never even fazes the pacing or the dramatic tone of the film. It reminds me in a way of the humor that permeates Mamoru Hosoda’s films, especially The Girl Who Leapt Through Time, though in this film it is not as central. I’m sure I’ve mentioned elsewhere how much I love it when anime combines both drama and humor into one package, and I can think of few titles that do it better than this.

Obviously this film is strictly for those who love a good mindbending story open to interpretation. Anyone else is not going to be impressed. If, however, you want to stick around for the surreal stuff, then this is a fantastic film, and it is certainly no minor entry in Satoshi Kon’s filmography.