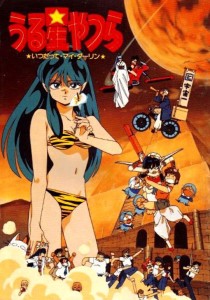 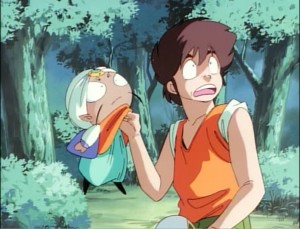 Always My Darling feels so typical in its situations that it loses the comedic edge that kept the series interesting. I think Takahashi’s writing is what kept this series afloat, and since they no longer had her source material to draw from this film floundered. The characters do little more than their trademark activities that they do all the time, making it all seem like something you’ve already seen before. The comedy is just too predictable to be all that funny.

Something else that made the film feel out of place are the visuals. The character design is very obviously from the ’90s. Since the rest of the series maintained an early ’80s aesthetic, this film comes across feeling very odd. The animation itself is a step down from the previous films as well. The TV series had never been great in that regard, but the films had some memorably great looking scenes, particularly Lum’s chase scene in Remember My Love. There are some action scenes in Always My Darling that step up and deliver some decent animation, but none of it is stellar. All of this only added to the lackluster feel of the film. 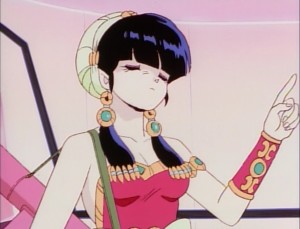 There are some clever moments and bits of nostalgia that long-time fans will find endearing, so it is worth watching if you love the series. I mean, really, if you went to all the trouble of watching the entire TV series, the other five films, and the direct-to-video series, why on Earth would you stop at this one? It’s not like it sunk to the depths of the Star Wars prequels or something. It actually starts out with a pretty decent explanation of the series’s premise, which means it could serve as a halfway decent jumping on point for someone who wants to test the waters on this series, as long as they keep in mind that the series proper is a good deal better.

Now that I’m done with the series, or at least my reviews of it, I feel like I should give a small retrospective on the films and what changes and surprises I’ve encountered watching this series. It was one of the most influential titles of my early anime fandom, and the series holds a special place in my pantheon of great anime. Despite that, I never saw the entire TV series (much of it did not get released in America until long after it had drifted off my radar), and a lot of changes went on over the course of the series that surprised me when I set out to watch the films. There wasn’t even one time where Ataru’s mother sobs, “I wish I’d never had him!” which was a staple running gag of the TV series, and that just might be the change I miss the most. 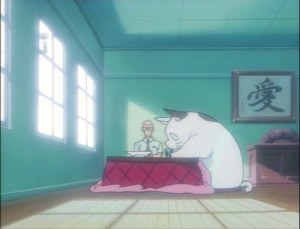 There are a couple of new characters that I was unfamiliar with, the most notable of them was Ryuunosuke, but the giant cat was even more intriguing because it was so mysterious. Just because it’s giant doesn’t mean it can talk, so I still don’t even know its name (or gender). There were also minor characters that stepped into the foreground. Benten, Oyuki, and Ran were present in every one of the films, and Benten especially played central roles in these films that dwarfed long-standing major characters like Cherry, Sakura and Ten. Now I like Benten and her pals, in fact they’re some of my favorite characters of the series, so I was rather happy to see them get some more action. But I loved the characters they were pushing aside, too, so I was a little sad at the same time.

The biggest change, though, was Shinobu’s change from primary love interest — one of the three main characters of the series — to minor side character. She was also one of my favorite characters (all right, all right, I’ll just come out and admit it, every character in the series is one of my favorite characters). This caused a drastic change in the nature of the series. In those early tales, Lum was almost the antagonist, constantly coming between Ataru and Shinobu’s true love (setting aside the fact that Ataru would hit on anything with boobs). That shift from center stage to minor footnote was shocking to me and left me wishing I had seen it progress more naturally across the length of the TV series. 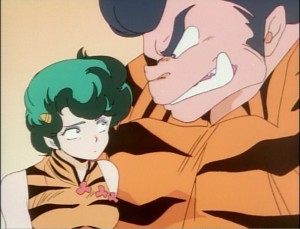 None of these films quite managed to live up the pure joy I got from the TV series, although The Final Chapter came the closest. It seems like I should call that one the best of the series, but it also left an odd feeling of having little importance, despite being the conclusion of the series. The other films all had their flaws to be sure, but they also each had something special that made them unique, a bizarre twist on the characters and settings that made them very interesting simply for the novelty of what they were trying to do even if they weren’t completely successful at it.

So I’m glad I watched all these films, but the TV series is unquestionably the best of the bunch. All the rest of these spinoffs are rather nonessential, but they are interesting experiments that have their fair share of entertainment value, even Always My Darling, as weak as it may be compared to the others. Unfortunately, the series is kinda hard to come by any more. But watching all these films has galvanized me to tracking the entire TV series down so I can fill in the gaps, and I’m expecting to find a great time.