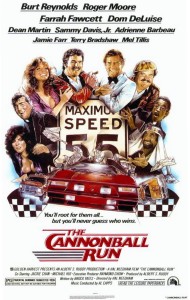 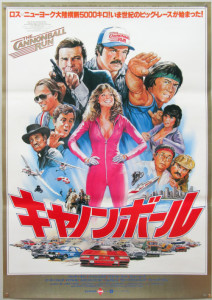 Unless you’re me, in which case “the freewheelin’ fun” actually means something that straddles the line between kinda boring and kinda amusing. There were definite highlights in the comedy, namely Roger Moore as Roger Moore, complete with a James Bond gadget-car and a theme song just a few notes off from the real deal. His first scene with his mother is superb, I just wish the rest of the film could keep up this level of high-quality comedy writing.

What doesn’t work is most of the rest of the movie, but as I’ve said many times before: it doesn’t really matter. The film is still largely entertaining and fast-moving despite its flaws. If nothing else, it’s fun just to see all the stars together in one movie. And even if Jackie is given the short end of the stick, he does get to flash a few good kicks towards the end during a brawl that involves almost the entire cast of the film. And any film that has the nerve to throw a bucket full of stars into a large-scale comedic brawl deserves to be judged on its level and not whatever level you wanted it to be on. I still think it could have been a lot better, but I rolled with it.

Being a Hal Needham film, there’s also a bunch of great stunts. I love a good “car through the side of a building” gag, and this movie has two! But there’s a lot more than that, with things like a car jumping into a swimming pool and a truck jumping over a moving train. Old fashioned stunts will always amaze and impress, and they help The Cannonball Run from getting too stagnant and boring.

By the film’s end, it’s clear that even if we only enjoyed small parts of the film the cast and crew enjoyed every second of the filmmaking process. Over the credits, a series of funny outtakes play, with the actors flubbing lines and doing the ol’ “laughing instead of saying the line” routine (which, of course gets everyone else laughing too). The Cannonball Run is the first film of Jackie Chan’s to feature outtakes, and yes, this is where he picked up the practice that would continue in his Hong Kong films to this day. It’s one of the hallmarks of a Jackie Chan movie, and for adding this to the Chan repertoire The Cannonball Run was a worthy diversion in his blooming career. If he never did this shitty part we might never have seen a single outtake!

Next up in this chronological journey through the films of Jackie Chan: Jackie heads back to Hong Kong for his third outing in the director’s chair, 1982’s Dragon Lord! See ya then!