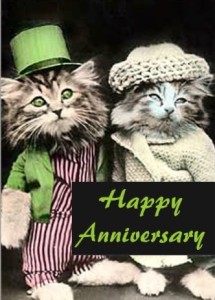 Time flies when you’re distracting yourself from life’s constant struggles! Here I am again, staring at the calendar and realizing that yet another year has passed and I’m still writing reviews. I started way back on April 12, 2010! Hard to believe.

April 2013–April 2014 brought many great movies, but I’m too lazy to look through the reviews and see exactly what they were. 🙂 I did run through all the Superman movies, as well as Peter Jackson’s filmography. There were a couple of cool milestones the site hit during this year also, most notably breaking the 1000 post barrier and Stephen reaching 100 reviews (with this week’s look at Birth)! So let’s dream big! 2000 posts total and 200 reviews from Stephen next year!

It’s my anniversary tradition to write about what I hope to do in the coming year, as well as check in on last year’s predictions and see just how far out in left field I was. I remember thinking I would be done with the Full Moon series two years ago, and yet still in 2014 there’s quite a bit more to go. Hahahaha. Woody Allen once said, “If you want to make God laugh, tell him your plans,” but at this stage of the game my plans don’t get that far. I plan and I laugh, because I almost instantly see through my own bullshit. In any case, here’s another load of false promises and ideas of what Year 4 at Silver Emulsion might be like!

Going down the list from last year’s anniversary post, I was a lot more realistic with my goals than I had remembered. Hmm… where’s the fun in that? Anyway, here’s the current state of everything at the blog:

This is the time where I generally ponder on other series that I want to start, but I’m going to resist the urge… even with this wonderful Criterion Zatoichi box staring me in the face. 🙂 Last year I mentioned potentially starting a Godzilla series — something I’ve wanted to do for about 3 1/2 years now — but that clearly isn’t in the cards right now. I don’t care about the US remake (yes, I saw the trailer… didn’t do anything for me), so why should I tie my series to it? Take that inferior, CG Godzilla!

I also welcome your suggestions, words of wisdom, encouragement, thanks, negative comments, spoiled food hurled towards my general direction… anything really. If you’ve read some of my stuff and you enjoyed it (or hated it) enough to come back a few times, I humbly thank you and hope you’ll continue to make Silver Emulsion a stop on your movie blog train. Choo choo!