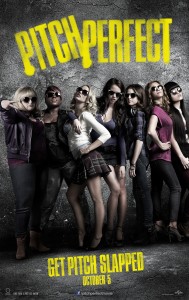 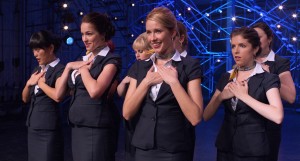 Pretty much the sole reason that this is the case is the film’s music. It’s not anything that I would listen to outside of the movie, but I appreciate what it does a lot. Covering entire popular songs with only your vocal power and a dope arrangement is a tough proposition, but literally every musical sequence in the film is impressive. Sure, it’s steeped in slick MTV editing (which I hate) and “clean,” too-perfect, Disney Channel-like visuals (which I also hate), but it’s all choreographed and arranged so well. I didn’t know a cappella groups were a thing before I saw this (are they really?), but I wouldn’t be surprised if a cappella groups started up because of this movie.

The negative aspects are many, namely the relentless modernity that will put off most viewers over the age of 15, the tired series of clichés they call a story, and a general feeling that made me question whether the film was actually subliminal brainwashing material to reinforce the misogynist idea that lesbianism is hawt. There’s a part of me that thinks most mainstream cinema is some form of large-scale societal brainwashing, though, so I can’t say that Pitch Perfect is even unique in this regard. I think you’d be hard-pressed to find a mainstream American film that would be so bold as to have a scene involving two males sharing an intimate, non-sexual moment while completely nude in the shower, but that’s exactly what the girls do here. Why? Because lesbianism is hawt, of course. As an on-the-nose, not-veiled-at-all reference to the fact that the characters are “baring their true selves” while singing, I guess it’s effective, but we all know why it’s there, and we also know that we’d never see something like this in a mainstream, male-focused film. 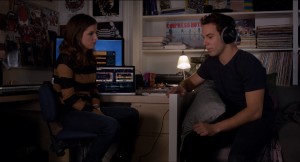 The overall theme is buried a bit, but it does counteract this brainwashing feeling some. The a cappella group that Becca (Anna Kendrick) joins is one based in tradition. Their costumes are 1960s-style stewardess outfits, and every girl pushes up their breasts to complete the retro sexy image. This throwback puts the group in the position of representing the world at the dawn of the sexual revolution, when women were in control of themselves, but were still ultimately in serving positions of little stature. By the end of the film, the girls have redefined what the group means and what their definition of sexy is, by basically allowing each member of the group to flaunt their individual style. Some girls are more reserved, while others are outwardly thrusting and bending over. Like everything in life, we are all individuals, and the idealized past is a complete fallacy. Only by embracing themselves and each other does their world flourish, allowing them to succeed. The film doesn’t do a great job of pushing these themes forward, but they are there if you look for them. 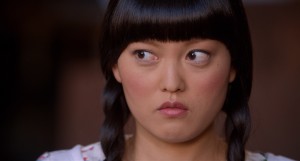 I also had a problem with the characterization of Becca. Apparently she’s supposed to be an “alt” girl, as many characters mention it throughout the movie. Thing is, she’s not that different from everyone else. She has a couple of extra ear piercings and some black eyeliner, but these things alone do not constitute an alt girl. Not a major issue, but there had to be a better way to handle this. I also would have liked to see the groups practicing more. Anyone who’s ever sang knows that it’s tough work that takes a lot of practice, but these girls literally bust out 10-part harmonies and full group arrangements on the fly. I know that practice isn’t fun to watch in a movie, but hello! Music montages! I suppose if I think of this as a movie musical (which it kind of is) then the characters’ ability to bust out amazing, on-the-fly arrangements makes a lot more sense. It is just a movie, after all, and a rather fluffy, lighthearted one at that.

Against all odds, I did indeed like Pitch Perfect. I still don’t completely understand why, but like many of the B-Movies that I love, it just entertained me in spite of every issue I should have with the film. I won’t recommend it, but if you do see it, you’ll probably like it at some level too. Either that, or I’ve gone insane.

Pitch Perfect is the Large Association of Movie Blogs’ (LAMB) Movie of the Month! Head over to the LAMB site for more reviews of the film, as well as the LAMBCast podcast discussing the film!