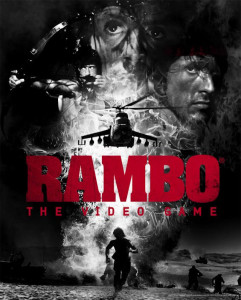 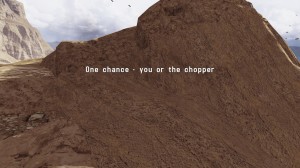 This is not Call of Duty. This is not Bioshock. This is not Mass Effect. This is motherfuckin’ RAMBO, one of the great action heroes of the ’80s. Sure, the first movie is more subdued and realistic, but Rambo: First Blood Part 2 is one of the best over-the-top ’80s action films. Teyon takes this vibe and runs with it, crafting levels that are as intense and furious as Rambo himself. What other game has enough balls to throw “ONE CHANCE – YOU OR THE CHOPPER” up on the screen, right after you watch Rambo screw an explosive head on to an arrow shaft? If you don’t scream a big FUCK YEAH after you see that, you might consider a career in something other than playing kick-ass action games.

At times, though, the game does get frustrating, but I can easily explain this away with two key points. First, it’s important to remember that Rambo: The Video Game is old school in its approach, just like an old arcade game. This is a score-based video game, where skill and quick reflexes will separate the Rambos from the Trautmans. Certain sequences are initially difficult, or play on the old “There’s no possible way I could have done anything about that until I died from it once” frustration, but remember the great arcade shooters of old, specifically the shmup sub-genre. If you want to do good and score high, you memorize patterns. Rambo: The Video Game is no different. And like those arcade games of old, Rambo: The Video Game doesn’t care if you make it to the next level. You only move on when you’re badass enough to do so. 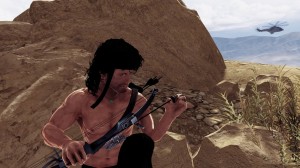 And secondly, there are the light RPG elements. You begin the game as a “stock” Rambo and as you play and level up, you are given skill points to invest in passive traits, as well as up to three perks that will help you succeed. We begin the game as Rambo escapes from a POW camp in a hail of bullets, the voice-over telling us that something in Rambo changed that day. This is when the man, John Rambo, was traumatized to the point of becoming the relentless killing machine we know today. Over the course of the game we are leveling up Rambo… and ourselves. What may be challenging at first is never out of reach with practice, perseverance and more power. If you keep dying, you’re just not Rambo enough yet.

So yeah, you might be frustrated at first, but get up and try again. Rambo wasn’t built in a day. He was trained and molded and traumatized into the man we know, so think of your first time through the game’s levels as your training in becoming Rambo. When I started the game, I was in no way prepared for the final mission that literally ends with almost non-stop explosions coming from a series of rockets, tanks and helicopters. It’s a harrowing, exhilarating experience — perhaps the most action-packed, intense level I have ever played — but it’s one that I needed to train for. 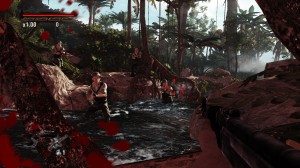 The use of QTEs is the one aspect that I felt could have been improved upon. Shenmue, the game that introduced QTEs, is my favorite game of all time, so I’m not opposed to QTEs in the slightest. Their implementation here is hard to get used to, though. The button presses aren’t always intuitive, so I ended up failing them many times over. And this isn’t Shenmue or Heavy Rain; Rambo: The Video Game does not script out conditional events based on your pass/fail of the previous QTE. If you fail, you fail. End of life. It makes sense in Rambo’s death-dealing world, but even I found my patience tested at times. The developers foresaw this and included a “No Fail QTE” perk to fix this problem, but I refused to use it. If you wanna be Rambo, you gotta take the hits and get the button pushes right! There’s nothing half-ass about Rambo, so I felt like using the perk would somehow tarnish his image and make my completion of the game fraudulent. 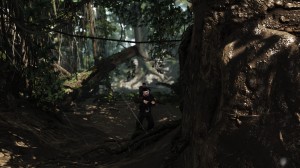 Some might also balk at the length of Rambo: The Video Game, too. As of this writing, I’ve played about six hours and that’s going through every mission once, and going through probably half the game again for fun and better scores. But like the great arcade games of old, the length of playing once from the first mission to the last mission is not the life of the game. The ability to replay the missions is where the game should shine, and in Rambo: The Video Game it does. These missions are diverse and fun, and the pursuit of better scores will have me coming back for more again and again. If you love Rambo and incredible ’80s action, then Rambo: The Video Game is exactly the game you’ve been waiting for.

Oh, and Terminator fans? Get excited! It was recently announced that Reef Entertainment would be publishing a game based on the first two Terminator films. Uhh, I know there’s a Terminator quote that would be perfect… That’s it! I’ll be back! I hope Teyon will be too!