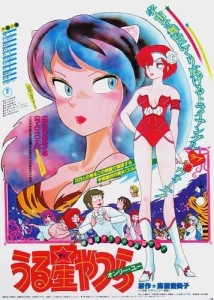 It actually does a fairly decent job of letting you know the basic premise of the story, but it doesn’t really explain how or why anything is set up the way it is, so I’ll give a brief rundown for the uninitiated. Lecherous idiot loser Ataru was mistakenly engaged to the flying, lightning-wielding alien invader Lum, much to the dismay of his girlfriend Shinobu, who puts up with Ataru’s perverted idiocy for reasons even she doesn’t know. Ataru spends most of his time trying to get away from Lum and be with Shinobu, that is, when he’s not chasing some other girl entirely. After that, a string of other aliens arrives, usually winding up in some romantic entanglement with either Ataru or Lum, such as Lum’s ex-fiance Rei who can transform into a Godzilla-sized, tiger-striped cow monster. Often the stories would end with the destruction of Ataru’s home, if not the entire town, and the next episode would begin as if nothing had ever happened.

Only You basically follows the same principle. This time Ataru finds out that he had gotten engaged to an alien girl named Elle when he was six years old, and he has no memory of the event. Now she’s trying to take him back to her homeworld to marry him and, predictably, chaos ensues. As always, Ataru is quick to abandon everything in the name of a new girl he hasn’t even seen yet, pissing off everyone else in the process. Of course, in a series like this it’s pretty obvious that Elle is going to have some serious issues of her own that make Ataru want to run away from her as well. One of the primary facets of his personality is that as soon as he gets something he wants, he suddenly wants to get rid of it. 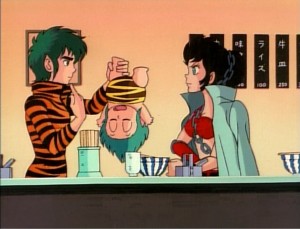 Where this film differs from the series is the sheer scale of its cast. There were tons of random rivals for love in the series, but only a few at any one time. In the film, all sorts of minor characters pop up to add fuel to the fire. The sexy alien biker chick, Benten, in particular steals the show despite having appeared in only one or two episodes of the series. Here she is more prominent than the regulars like Ten, Lum’s fire-breathing cousin, or Cherry, the midget Buddhist monk that follows Ataru around predicting his imminent doom.

This kind of change isn’t a bad thing really, except that it kind of disrupts the entire nature of the story. Shinobu winds up relegated to a few bit parts, despite being one of the three lead characters, and that creates a feeling that Lum is “the one” for Ataru. One of the great things about the series was just how well it avoided siding with either Lum or Shinobu as Ataru’s eventual partner. Sure, Lum is always the most striking of the two and routinely plays the role of lead character rather than Ataru, after all, she is the hot green-haired alien that spends all day wearing a tiger bikini. But despite that, the show never left Shinobu in second place, even having a time-travel episode where we find out that Ataru marries her in the future. The way Only You casually tosses Shinobu aside is rather disappointing and ruins the sense of mystery about who the main character will end up with which any good love triangle needs to maintain.  (To be fair here, I don’t think I ever got to see the entire series, so it is possible that I am not taking into account any change in tone that the series underwent over time.)

One of the other hallmarks of the series is its complete irreverence. It’s a comedy first and always. Only rarely would it even touch upon the genuine emotional concerns of the characters, and when it did, it would only do so briefly before moving on to another episode of zany mayhem. The film still has a heaping mountain of wackiness, but it also has more serious moments than I remember from the entire TV series combined. Again, for a film entry to a long-running series, this isn’t necessarily a bad thing, but I do think it was a mistake here. One of the reasons it’s so much fun to watch the universe shit all over Ataru is that we have no emotional investment in him. In fact, he usually deserves every bit of punishment he gets. In Only You, this is especially true. Even the calamities Ataru doesn’t directly cause are always made worse by his own selfish and lecherous actions. When the film tries to inject sympathy for this guy it just doesn’t work. He’s a complete asshole; he doesn’t deserve any sympathy. The only sympathy you are likely to have is for Lum and Elle, whose lives Ataru is so casually ruining. It creates a more tragic tone for the film that clashes with the lighthearted comedy.

I think a lot of the trouble stems from it being Mamoru Oshii’s first film. He also directed most of the TV series, so it may seem odd that the film feels different, but this was very early in his career. It feels to me like his personal style was starting to develop. It’s been said that the second Urusei Yatsura film is where his style really took off, but I can already see it budding in this film, especially in the opening scene which depicts Ataru and Elle playing together as children with stark, contrasting color schemes and stylized imagery that are very unusual in a silly comedy. 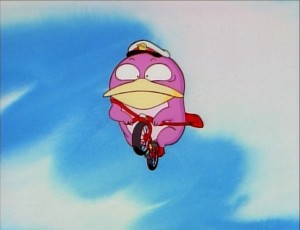 Partly, the series worked so well because Oshii had such great source material to work from, but it seemed to be direct adaptations of Takahashi’s manga without anything of Mamoru Oshii added in. I think he was stuck doing a series that wasn’t well suited to him, and once he got a real film to work on, he wanted to stretch his wings rather than follow a preset path. Or maybe I’m just coming up with random BS here. But whether I am anywhere near the mark or not, the things Oshii put into Only You didn’t quite work out, which is rather predictable since off-the-wall comedy is not what Oshii is known for. This makes me both very curious and very worried about what the second Urusei Yatsura film will hold.

I’ve been pretty critical of the film here, but it’s not bad by a long stretch. It’s not as good as the TV series, but that’s not a complaint when the series is still one of the best comedy anime ever created. Not being quite as good as that still means it’s pretty damn entertaining. Its only real drawback is that it assumes knowledge of the characters and situations that make it difficult to jump into. Fans of the franchise, though, will still find a lot of good content inside, and fans of Mamoru Oshii will get a very interesting look at the early development of his style.