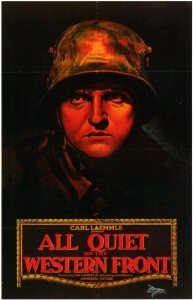 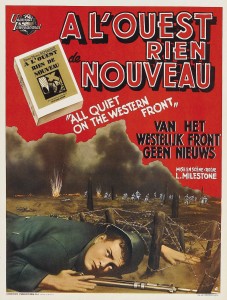 On a production level, All Quiet on the Western Front is astounding. There are many scenes filled with hundreds of extras, layering the film with an air of realism that few war films can come close to matching. Even the battle sequences — which are multiple and surprisingly long — hold up as skillfully edited pieces of montage that contain much more of the kinetic energy of Saving Private Ryan than I ever would have expected them to. It was a hard-hitting experience to watch the film now, I can only imagine how groundbreaking and impacting it was in 1930. It is an amazingly well-produced film that entertains as well as it drives home its “War is hell” message.

The cinematography is also quite impressive. The battle sequences alone must have caused the crew some serious headaches, as director Lewis Milestone often has his camera moving effortlessly along the top of the trenches, or tracking the soldiers as they run across the exploding, war-torn battlefield. There were also a few close-ups towards the beginning that reminded me greatly of silent films. These shots captured the young classmates as they cried out their support for joining the army, but instead of their individual cries, only the general sounds of the boisterous classroom can be heard. It made me think that Milestone might have shot these men in this way to purposefully — and perhaps subliminally — harken back to the silent age. All Quiet on the Western Front was made only a couple of years after the dawn of sound at the cinema, but by using these “old-style” images it felt like Milestone was adding another layer of naivety to the characters. If they only knew what was around the corner for them.

All Quiet on the Western Front is a stunning film that will not disappoint anyone who likes classic films or war films. Lewis Milestone created one iconic, amazing film here, so it’s no surprise that it won Best Picture and Director at the Academy Awards, and continues to be seen as one of the quintessential war pictures. Highly recommended.

All Quiet on the Western Front is part of my 2014 Blind Spot Series where I see one movie a month that I feel I should’ve seen a long time ago. It’s all the brainchild of Ryan McNeil over at The Matinee, one of the web’s premiere film blogs. Head over there tomorrow where he’ll have a post of his own for the series, as well as links to all the other people taking part in the series. And feel free to participate on your own blog as well!