> Reviews by Author > Syreeta's Reviews > About this Movie… Again 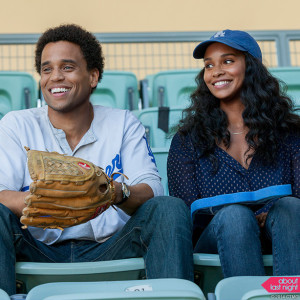 About getting to 3rd base….
The sex scenes are ultra sexy. The formula is a mix of handsome but an equal amount of beautiful, add a cup of sexy, a pinch of laughter, and then mix it with the intimacy. Yum, Yum, I want second helpings. When Debbie and Danny are in the tub and he kisses her knees… I just about cried. There is nothing more endearing than a man polishing your toes or pillow talking while in the tub. There are a plethora of sex scenes: on the table, in the public bathroom stall, dressed as a chicken, in the bed, etc. Debbie and Danny’s scenes are intensely passionate, while Bernie and Joan’s are wild and raunchy.

I’ll never forget the clucking sex scene with Bernie and Joan. I thought I was going to get kicked out of the theater from laughing and yelling, “Oh shit!”…so hilarious. Both couples deliver a good time!

About the Move-in…
The move-in happens fairly fast. Danny is the one that insinuates that Debbie is already there everyday. Unfortunately, they move in together before they ever go out on a real date. The typical things happened such as: she “pretties” the apartment, they have more home cooked meals than take out, they argue but enjoy making up, and they spend less time with friends. Bernie and Joan are totally outraged by the move-in and are outspoken in giving unsolicited advice… disastrous. Danny and Debbie also have outside temptations from their exes, Steven (Adam Rodriquez) and Alison (Paula Patton).

About the friendships…
The girlfriend conversations were what I call “real talk.” When black women talk with their girlfriends, it’s very open, no holding back. We discuss stuff in detail. I felt that the film depicted real-talk dialogue. I’m not a man, but I’ve been around enough black men to know that although Bernie was vulgar, he wasn’t far off the mark regarding real conversations between friends. I definitely would have appreciated a few less “bitches” and “pussy,” but Bernie’s character was meant to be shocking. The film depicted the strong friendships despite the love taking place, with scenes like the ladies in the gym and the guys in a pool. Black people are rarely shown swimming in movies. Yes, we do swim… hahaha! 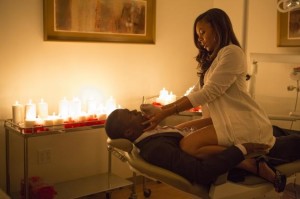 About the break up…
There were many things that could have constituted the break up. They had a fragile relationship with little trust, they weren’t “having fun,” their friends were whispering in their ears, and many other things. But I think the ultimate problem was that Danny was in transition. He left a job he hated, but wasn’t initially clear on what he was going to do with himself. Danny and Debbie were not secure enough to communicate honestly. They spent more time making love than discussing important issues in their relationship. Debbie confronts Danny about whether he loved her or if she was just “one long one-night stand.” It’s his indifference and unresponsiveness that has her move out and not look back.

About the end…
The ending starts with the surprise reuniting of Bernie and Joan. Their romance is silly and sexy, but laced with deep feelings. Kevin Hart shows some depth as an actor. Part of the draw to this remake is the intelligent casting. With a little honing and a serious lead role, I think he might just cross over like fellow comedians Eddie Murphy and Jim Carrey. 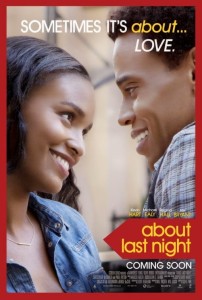 Debbie and Danny discover that they should give it another try, but go slow. The scene at the end where Bernie and Joan are talking shit about Debbie and Danny (and just laughing in general), is truly funny. It appears to be a little improvised because the smiles and laughter are genuine and unfiltered. This is one of my new favorite romantic comedies. Not because it’s the greatest romance ever written, but because it’s funny, sexy, genuinely sweet, and has hella fine actors and actresses. I don’t exactly know… there was just… something about this movie!

About Our Black Love Fest…
I was going to rank the movies in the order that I loved them, but I just can’t. They were enjoyable for different reasons.

Brown Sugar showcased the brilliant metaphor between music and falling in love.
Love Jones was Grown-Up Sexy and artistically stimulating.
Something New was well written and showed some of the real issues of interracial love.
Love & Basketball was sweet and endearing and identified ongoing social issues with women and sexism.
About Last Night was fun and upbeat. It just made me laugh and feel good!

I hope that you don’t just take our word for it. Please go out and enjoy this film and rent the others. My new rule is to see “Black” Romantic comedies on opening weekend, so that Hollywood will understand the importance of having movies that showcase the color of love. Maybe one day romantic comedies won’t have to be identified as black or white, but just romantic comedies. Until then, I have no problem with enjoying a screen full of beautiful black men and the showcasing of a good sister-friend relationship.

Don’t forget to join us next year for our 3rd Annual Valentine’s Love Fest. Who knows what we’ll come up with by next year!