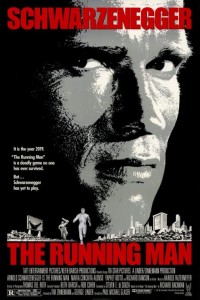 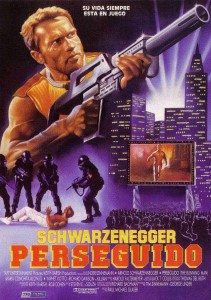 The Running Man is also a futuristic film that is unafraid to fully embrace the ’80s and its excesses. In The Running Man people and places look pretty much as they did in 1987, giving the film a familiar, near-future quality. The film also boldly uses ’80s elements such as choreographed dance, rock music (including a searing guitar solo over the Arnold/Buzzsaw confrontation), and quick, visual storytelling like Arnold carrying a gigantic steel girder over his shoulder to show us just how strong and formidable a hero he is. These elements surely date the film as one from the ’80s, but I would argue that overly designed future clothes and the like would date it even more. The choice to use ’80s aesthetics grounds the film and adds to the experience. This particular vision of the future is one of pure amoral excess, something the ’80s were all about for a lot of people.

Another key to the success of The Running Man is the cast. Of course, Arnold is there kicking ass and droppin’ great one-liners as always, but The Running Man also boasts Yaphet Kotto, Jesse Ventura, Jim Brown and Maria Conchita Alonso. The biggest boon — by far — is the use of Richard Dawson as the host of The Running Man. His acting is superb, but it’s his experience and familiarity as a real game show host on The Family Feud that allows the audience to instantly buy into his role (provided they are old enough to remember his days hosting the show). He is the perfect string-pulling, smiling villain mastermind, doing whatever it takes to control the population and raise his ratings. 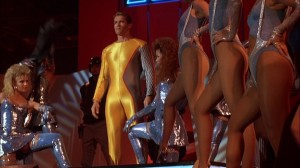 The Running Man also very effectively illustrates how powerful editing is, and how destructive and manipulative it can be in the wrong hands. The opening scene shows Arnold refusing to fire on innocent civilians, but this footage is later edited to incriminate him as an unflinching mass murderer. In the years since The Running Man, TV has obviously gone in directions similar to the title show (and another show featured briefly in the film, Climbing For Dollars). Editing is crucial to reality TV as it constructs the storylines out of days and days of raw footage. There is also crafting of characters going on, and while there’s nothing inherently wrong with this in a reality TV setting, I feel like the public is so accustomed to this style of programming that we could easily see something like the fabricated “Butcher of Bakersfield” footage and not even know what was happening. That is, if it hasn’t happened already. Or am I being too paranoid? In any case, check your sources and be an informed citizen. With news outlets willfully and purposefully spinning stories to their party lines, the public has to remain educated so that the future depicted in The Running Man does not come to fruition.

On top of all that, The Running Man is just a whole lot of badass fun. Arnold runs around, taking on comic book style, over-the-top gladiators of the future? If you can’t extract a bucket full of entertainment from that I can’t help you. And yes, I realize the irony of gaining pure entertainment from watching “my guy” kill the other guys, just like the show’s audience in the movie. Hmm… perhaps I’m part of the problem. I guess I’ll just have to watch the movie again to check. The Running Man is a satirical, dystopian, ultra-violent, testosterone-fueled masterpiece of ’80s action. If you haven’t seen it, run to your local VidRent unit and spend those credz!

Next up in this chronological journey through the films of Arnold Schwarzenegger is a film that I only saw once as a small child: Red Heat! See ya then (which won’t be for at least two weeks because we have something special in store starting next week)!