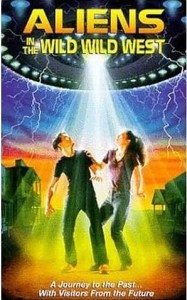 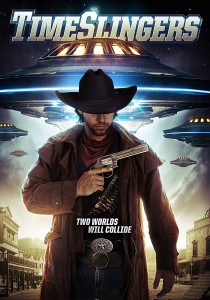 This vacation leads the Johnson family to a ghost town where the parents almost immediately vanish. Not in a supernatural way, not in a kidnapped way. They just exit the film. See, Sara was interested in checking out the sheriff’s office and Tom was charged with sticking close to her to make sure she didn’t get into any trouble. Meanwhile, the parents went off to explore… something. For all we know, the parents also found a mysterious device in the floorboards of the building they were checking out, said, “What happens if I push this button?” and had their own adventure in some distant time. But that story remains to be told. What we do know is that Tom pushed the button on the device he found with Sara and the kids were whisked back to 1880.

This is kind of the Moonbeam trademark story — ’90s kids taken back in time — and Aliens in the Wild, Wild West doesn’t do a lot to distinguish itself as one worth caring about. Even the “wild, wild west” setting is pretty tame, but I’ll admit that it sounds better in a title than the “mild, mild west” (and you get the name recognition from Will Smith’s 1999 film Wild Wild West, too). But the film seems to acknowledge its lack of an engaging setting by adding the final ingredient to its B-Movie stew: aliens. Soon after the kids arrive in 1880, a very representative example of low-budget, ’90s CG comes along in the form of a flying saucer, delivering to us the film’s hairy aliens. I could try and relate more of this moment but the western hero of the story, Johnny Coyle (Barna Moricz), said it best when he said, “Wasn’t no shootin’ star, it was a wagon wheel or somethin’, but big! Tom calls it a U. F… uhhh, O.” 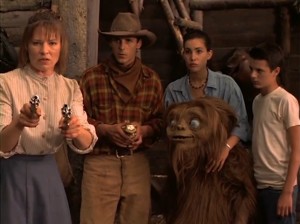 Realistically, the aliens look fake and are obviously dudes in suits. The heads lack a lot of articulation, but they’re still pretty amusing because the aliens’ eyes are wide open so they always look REALLY SURPRISED! The alien youngin kinda looks like E.T. if E.T. went hippy and let his hair grow out. He also reminds me a bit of the Fuzzbucket, the title character in an ’80s TV movie that I was obsessed with as a kid. But that’s OK because realism is definitely not the goal here. Any film that would add a metallic clanking sound effect when a dying alien mistakenly hits its head on a jail cell door while it’s being rescued from certain death is clearly going straight for the funny bone. Aliens in the Wild, Wild West isn’t meant to be taken seriously; it’s just dumb, childish fun.

The acting from nearly the entire cast is questionable, but some of that is definitely the fault of the shoddy dubbing that plagues the half of the cast that are Romanian natives. This is to be expected in a Full Moon film of this vintage, though, and while there are some really bad instances here, I’ve definitely seen worse (and funnier) bits of dubbing in other Full Moon films. Retro Puppet Master, anyone? 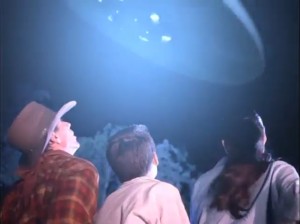 The one shining light through all of this is Carly Pope. Her acting is noticeably better than her co-stars, so it’s no surprise that she has gone on to a long, successful career in TV and film. Also of note is her co-star Taylor Locke, who went on to musical success in the band Rooney. His experience on Aliens in the Wild, Wild West must have had some grand, psychological effect on him, as in 2012 he tried to get a TV show off the ground called Planet Rocke with Taylor Locke, which was to be “the first music talk show from space,” featuring hairy alien sidekicks that vaguely resemble the ones seen in Aliens in the Wild, Wild West.

Aliens in the Wild, Wild West isn’t a film that will rock your world, but if your kids enjoy B-Movie westerns and REALLY SURPRISED aliens then definitely give it a spin. It’s a little too long in the tooth, but it had more than enough clichéd western fun to satisfy this Full Moon fan.

Next up in my journey through every Full Moon film, I’ll be checking out Skull Heads from 2009! See ya then!