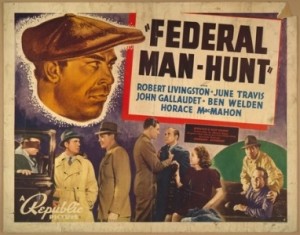 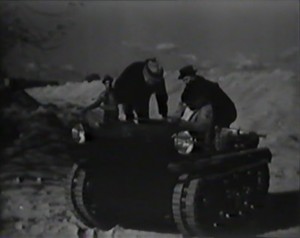 So I’ve described bits of the ending (probably a new record for “Number of Words to Spoilers in a Silver Emulsion Review”… Someone call Guinness), but I should probably backtrack a bit and describe where Federal Man-Hunt begins. With a title like that, it’s only fitting to start in a prison. We open on a couple of guards and a priest making a long walk towards the cell of Pete Rennick (John Gallaudet), a convict accused of stealing a company’s payroll. They take Rennick down the hall to be married! Whoa! Didn’t see that coming! I also didn’t see the quick elbow to the guard’s ribs or the chair through the window coming either. Rennick dives through the open window and the federal man-hunt of the title is on!

God only knows how Rennick made it out of the prison after his daring jump, but he did and we reconnect with him at his safehouse just a few minutes later. Concurrently, we’re also following the story of his bride-to-be, Anne Lawrence (June Travis), as she is sent by Rennick to recover the evidence necessary to prove his innocence to the courts. Oh right, I never mentioned that. Apparently Rennick was wrongly accused of his crimes and he thought that instead of waiting for due process and the appeals court to get their shit together, he’d just stage a prison wedding and throw a chair through the window. Either he’s not innocent or the big house fried his logic circuits. Whichever it is, these incredible events make for quite an enjoyable B-picture, even if the middle is boring. 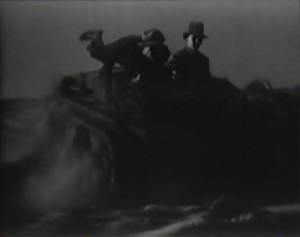 Federal Man-Hunt does not get any mention in Sam Fuller’s memoir, A Third Face, so I imagine he was either not happy with how it turned out, or he was only responsible for a brief story outline or something inconsequential like that. I’d like to imagine he came up with the thrilling opening and finale to the yarn on a whim, when asked by an executive if he had a story kicking around that he’d be willing to share. Clearly, I have no idea if that’s the way it went down, but I love the idea of Sam Fuller passionately describing the chair-through-the-window wedding prison escape to an eager producer, so I’m going to embrace it.

I wish I could rate Federal Man-Hunt higher, but I can’t ignore how much that middle section drags. It’s not horrible or anything, it’s just that compared to how over-the-top and wild the ideas in the first and third act are, the quaint middle section just can’t cut it. It pulled me down so far that I fell completely asleep and missed the thrilling finale. I woke up, saw the ATV, thought I was dreaming, and woke up a couple of minutes later as the music hit a crescendo to signal the picture’s end. I re-watched the last few minutes and could hardly believe my eyes as that ATV drove its way into my heart. In spite of its flaws, Federal Man-Hunt is a fun, nicely shot movie that entertains very well, mostly due to the absurd, outlandish situations it places its characters into.