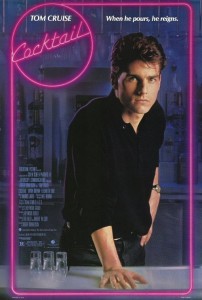 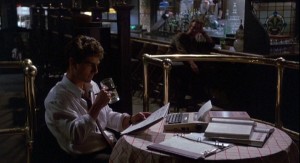 Plot points are not Cocktail‘s strong suit, though. I don’t know that the film has a strong suit actually, although I will always get a kick out of people flipping bottles around as they make drinks. It enchanted me as a child in the film’s trailer, and now 25 years later it still works its magic. But back to the plot!

Brian (Tom Cruise) has just been discharged from the Army and he’s looking to make his big splash in life. But trying to get a job on Wall Street and Madison Ave. proves difficult, as Brian is told he needs college and experience. So what’s a budding entrepreneur to do? Get a job in a bar while he goes to community college, that’s what! And of all the bars in New York City, he walked into Doug Coughlin’s (Bryan Brown). Doug teaches him everything he knows, including the notion that school’s for chumps and looking for a rich chick with “Fuck Me” eyes is the way to go. 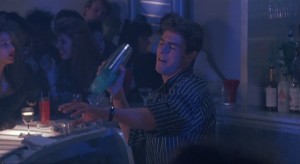 If you watch a lot of movies, you’re sure to know that this kind of thinking will only get Brian so far. And you might also expect there to be a character arc where Brian learns the errors of his mentor’s ways and tries to correct them. Well, they get to the understanding part and the new beginnings part, but instead of taking the character through something that feels like growth, these resolutions spring up simply because the film needed to end on this type of upbeat note. Cocktail definitely doesn’t earn the payoff it achieves, even if that payoff isn’t even all that great. The romantic angle is especially slight, but I think it’s important to note that the film’s arc is about connecting Brian with money, not finding true love. Seen through this light, the film’s flaws make much more sense.

Cocktail is also a comedy, but I don’t think I laughed once. It’s clearly not a movie aimed at me, and for that I’m glad. Most of the humor comes from the two bartenders trading stupid sexist jokes and while I’m no PC policeman, these jokes are just plain dumb and unfunny. Stuff like, “You think the waitresses were mad tonight? Wait till you give them crabs!” It’s almost funny in an absurd way, but I think it’s more shocking to think that these are the lines that survived a likely series of rewrites and a number of eyes on the project.

In terms of movies that are stuck in the ’80s, definitely go with something that encapsulates the fun of the decade. Cocktail is not such a film, and while I’m always somewhat disappointed to dislike a film, I’m much happier knowing that this one is in my rear-view mirror and getting further away as I type.

Cocktail is the Large Association of Movie Blogs’s (LAMB) Movie of the Month! Head over to the LAMB site for more reviews of the film, as well as the LAMBCast podcast discussing the film!