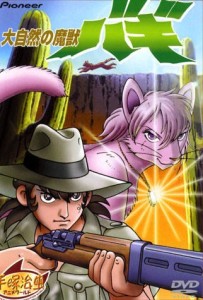 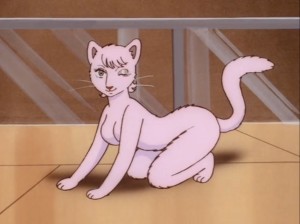 There are still a lot of various settings bouncing around, from South American deserts to crazy mad scientist labs filled with animal heads in jars, and even a youth biker gang roving through the city. But what always made these transitions stand out in a Tezuka film was just how sudden and random they felt. In Bagi all of these scenes are told through a series of flashbacks. The frame of the story is a hunter named Ryo setting out to slay the dreaded monster Bagi. We know this is going to end in an epic showdown between the tenacious hunter and the ferocious beast, but we don’t know why. So while he lays in ambush, Ryo tells his young guide the story of how Bagi changed from adorable pet to sexy minx to vicious monster.

This setup fills the tale with a sense of foreboding that ratchets up the tension and keeps the plot gripping and full of impact. There are still plenty of lighthearted elements that would have been simple humor in any other Tezuka film, but here they feel weightier and more fragile because of the knowledge of just what lies ahead. Bagi wearing a feather dress and wig while dancing in the rain is funny and goofy, but we also know it’s a fleeting moment of happiness that is soon to pass. I suppose that Bagi‘s strangeness is not so much its difference from other Tezuka films, but is instead caused by the serious tone of the story which this time overtakes the humor. 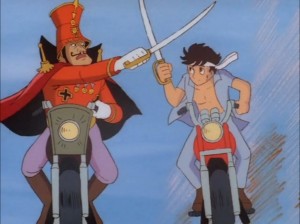 While Ryo may be the main character, Bagi is clearly the star, and it’s hard to come away from her tale without any emotional attachment to her, even if you do find the idea of sexualized animal people disturbing. As for myself, that aspect barely registered. Somehow she wound up in the same category as anthropomorphic Disney animals, like Mickey Mouse or Donald Duck. Bagi had about as much effect on me as the Animaniacs shouting “Helloooo nurse!”

There is a rather bizarre plot point towards the end regarding Bagi’s ability to speak. I won’t spoil it, but it has no explanation at all. I can’t quite call it a plot hole, so maybe contrived is a better term. That’s really my only gripe about Bagi, though. It’s full of sentiment and emotion, but still balances that with plenty of fun and adventure. This might well be my favorite of these old Tezuka films, and it’s well worth a watch for anyone who is willing to look at an ’80s story without scoffing at its age.

And again, U.S. and Canada residents can watch it free through Anime Sols in the 24 Hour TV Specials section where they have decided to spell it Baggy, so you’ve got no excuse not to see this one.