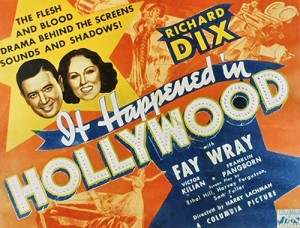 In any case, the film opens with western film star Tim Bart (Richard Dix) making a celebrity appearance at a children’s hospital. His larger-than-life cowboy image resonates well with the kids there, and he inspires many of them to be cowboys themselves one day. An especially sickly kid known only as Billy the Kid finds Tim’s visit especially touching, and as the film continues Billy writes Tim and reminds him that there are still those that believe in the mystique of his screen persona. But what Billy doesn’t know is that Tim’s ranch has been foreclosed on, his cowboy friends have all found new jobs around town, and his days in the pictures are over.

It Happened in Hollywood isn’t especially emotional — the tone shifts subtly between very slightly comic and equally slightly sad — but it does offer some depth beyond the rather simple story going on at the surface level. Of course, the most interesting aspects relate to the events around the final act of the film, so for those who haven’t seen the film and care to: SPOILERS AHOY!

Late in the film, Billy has come to visit Tim. Tim hasn’t the heart to tell Billy that he’s not in movies anymore so he rounds up a bunch of celebrity look-a-likes and does what Hollywood does best: create a grand illusion. But as this scene went on, I wondered if Tim was actually doing it for himself. When Tim’s old girlfriend Gloria (Fay Wray) comes to the party, he actually shuffles the kid off without a second glance. He doesn’t truly care about Billy, he only cares about preserving his image in the kid’s mind. This is further proven when Tim and Gloria sit in the grass and discuss trivial matters, even playfully bantering about which of them might take care of young, sickly Billy. But in actuality, no one at the party actually cares. They are all self-centered actors. Billy is left alone, so he tries to fulfill his cowboy dreams by riding a horse for the first time. Of course, he hurts himself and Tim comes to his rescue.

But the damage was done. They can play the film off as a rise-fall-rise yarn of the Hollywood star — which it most definitely is — but this “Actors care more for their image than actual people” angle is far more interesting. I had hoped to find some clue in Fuller’s autobiography that this was his original intent with the script, but alas he makes no such claims. Even so, I must imagine that Fuller got a kick out of writing such a scene, as it feels like exactly the type of in-your-face social commentary that Fuller thrived on. This great scene of subtext also leads to a fantastic, unexpected conclusion when Tim feels the weight of responsibility thrust upon him.

It Happened in Hollywood isn’t a great movie, but it’s a fun little jaunt into 1930s Hollywood. It’s not quite as emotional or interesting as I’d have liked, but its mix of Hollywood-based satire and genuine entertainment works rather well to make for a brisk 67-minute feature. Sam Fuller fans could easily avoid this one, but if you enjoy ’30s cinema and you’ve seen all the heavy hitters, It Happened in Hollywood is enjoyable enough to be worth your time.