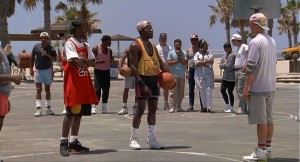 This could definitely be called the film’s major flaw. There is a continual repetition of the same ideas throughout the entire film, and I can’t imagine how boring it would all seem to someone who hates basketball. Even I finished the film thinking it lacked a bit around the edges. In the final act, it felt like the film thought there was depth when there was actually very little perceptible in the moment. But as these things often work, as I sat down to write about the film things started to come together.

There’s a thread through the film about how Billy thinks that black men would rather look good and lose than look bad and win. Billy throws this out while also saying that as a white man he is exactly the opposite. He doesn’t mind dressing poorly and looking like a chump, just as long as he wins. On the surface, the observation is true of both characters, but neither philosophy gets the men what they hope for. No matter how you look, if you make the wrong choices, life isn’t going to go your way. Unless you’re lucky, but you can only ride on luck for so long. 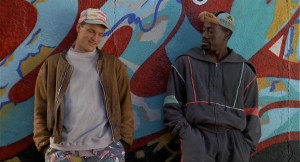 The end of the film brings this thread around to its culmination. It does not offer conclusions to all the film’s plotlines, though, and it is somewhat disappointing in this way. But even though the unresolved day-to-day struggles of these characters make up much of the plot of White Men Can’t Jump, they aren’t the point of the film. We don’t need to know what happens because it doesn’t matter. What does matter is that the characters have hopefully learned something from each other, and, as clichéd as it sounds, that they aren’t that different from one another.

White Men Can’t Jump also features excellent performances from its entire cast. Wesley Snipes and Woody Harrelson are especially perfect together, creating a wonderful antagonistic screen friendship. Their basketball scenes together are also well-filmed and capture the kinetic energy of a good street-court ball game. The use of slow-motion during the games is especially well-done, and while some might call the scenes excessive and drawn-out, as a fan of the game I enjoyed every last second.

White Men Can’t Jump is a great movie that transcends some minor flaws to stand the test of time. For me, anyway. Like I said I have no idea how this movie would play to someone who doesn’t like basketball or remember the ’90s, but I loved it. And with that, this review is in the refrigerator. The door’s closed, the light’s out, the eggs are cooling, the butter’s getting hard, and the jello’s jiggling!

White Men Can’t Jump is the Large Association of Movie Blogs’s (LAMB) Movie of the Month! Head over to the LAMB site for more reviews of the film, as well as the LAMBCast podcast discussing the film!