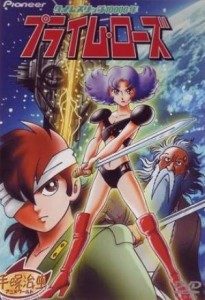 The story itself is perhaps the most reminiscent of traditional Tezuka fare. It starts with a space station named Death Mask (well, that’s not ominous at all) that breaks in two and plummets to the earth, wiping out two cities in the process. But then Spock (!?) shows up and tells the main character that the cities weren’t actually destroyed; they were flung 10,000 years into the future. So now Gai hops in his time machine to see what happened to them. It turns out the future is a lot like a cross between ancient Greece and ancient Egypt. Then Gai gets kidnapped and forced to build statues with a bunch of other slaves, and in the only major Tezuka-style focus-shift of the film, we switch to the perspective of Emiya, a girl forced into marrying a total jackass that executed her boyfriend. So she does what any girl would do in this situation: she hops into an outfit halfway between a bikini and a dominatrix costume and runs off with an old homeless guy who promised to teach her sword fighting. Sounds perfectly reasonable to me.

At this point the film turns my head to jelly. It’s not even the oddity of the scenario. I’ve seen much weirder and loved it. What throws me is Emiya looking sexy. First off, I had figured these 24 hour TV specials to be aired in a family time slot, so what’s with all the sexual tension and the random bathing scene here? Is it cultural disconnect, or did I miss something? But whether it’s kid friendly or not, the pressing issue for my sanity is seeing Tezuka characters in sexual situations. Now I’ve read Ode to Kirihito, so I know just how far down the depravity hole Tezuka can go, but seeing his characters looking in any way provocative always crosses a few wires in my brain. I’ve never gotten used to it. The designs are just too childish looking. They look like they should be playing peekaboo with toddlers. When you sprinkle a layer of kinky on top of that, the contrast just fries my brain. 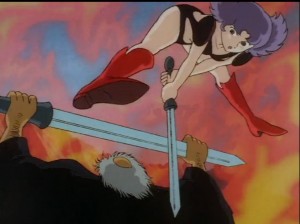 Now don’t think any of this diminished my enjoyment of Prime Rose at all. If there is anything I have gotten used to from Tezuka, it is being confused. It just comes with the territory. Tezuka’s stuff always gives off a surreal vibe. And never let it be said that I don’t love a good warrior princess story. That’s my favorite kind of story. Mix it with Tezuka’s unique style and you get one hell of a fun ride filled with bizarre giant monsters, wacky sword fights, and mysterious demonic entities.

As much as it drifts from Tezuka’s normal M.O., Prime Rose is also undeniably his. While the humor is subtler, its tone and timing could only have come from Tezuka himself. The plot may be focused, but the twists are every bit as sudden and baffling as ever. The film carried me from start to finish eager to see the next bit of inexplicable insanity.

Of course, like all the other 24 hour TV specials I’ve reviewed, this is available free on Anime Sols in North America.